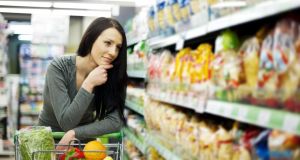 British online supermarket Ocado posted a slight acceleration in quarterly sales growth and said it expected to continue growing ahead of the online grocery market.

The firm, whose range includes products supplied by upmarket grocer Waitrose, said on Tuesday gross retail sales rose 15.2 per cent in the 12 weeks to Feb. 22, its fiscal first quarter. That compares with a rise of 14.8 per cent in December and growth of 14.9 per cent in the final quarter of Ocado’s 2013-14 year. “Our business continued to grow, against a backdrop of a retail market that remains challenging and competitive,” said chief executive Tim Steiner.

Average orders per week increased 18.1 per cent to 183,000, though average order size dipped 2.4 per cent to £114.72 pounds. “Notwithstanding the uncertainty that remains in the marketplace, we expect to continue growing slightly ahead of the online grocery market,” added Steiner.

Ocado signed its first third-party deal with Britain’s fourth biggest grocer Morrisons in 2013. That helped the firm to last month report a pretax profit for the 2013-14 year, the first in its 15-year history. It also said in February it aimed this year to seal its first technology deal with an overseas retailer. Shares in the firm, which have had a roller coaster ride since they debuted at 180 pence apiece in 2010, closed Monday at 370.5 pence, valuing the business at £2.16 billion.