O’Brien keeps it in the family with Topaz stake offload

Emmet O’Neill rolling out Re.Store brand across network of forecourts 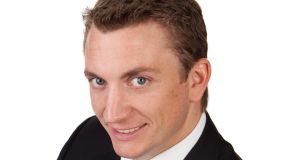 Emmet O’Neill: bought 10 per cent of Topaz, which, once it swallows Esso, will control nigh on a third of the Irish forecourts market

Emmet O’Neill, a nephew of Denis O’Brien who also happens to run the billionaire’s Topaz fuel station network, has snapped up a chunk of the business from his uncle. He appears to have picked it up for a nice price, too.

O’Neill, a businessman in his own right who last year sold Smiles Dental for €36 million, joined the company as chief executive earlier this year.

He has apparently bought 10 per cent of Topaz, which, once it swallows Esso, will control nigh on a third of the Irish forecourts market. Nice place to be for a chap who only turned 36 earlier this month.

O’Brien took control of Topaz for €150 million in December 2013, buying its €300 million debt from IBRC at a knockdown price of €150 million. He used an Isle of Man vehicle, Kendrick Investments, which has since been renamed Topaz Investments.

A quick nosey through its company documents reveals that last month it allocated a stake to a Cyprus-registered company, Kouchin Holdings. This company is ultimately owned by O’Neill.

Calculators at the ready?

The Manx documents suggest O’Neill paid €13.13 a share for his 266,666 shares in the company that owns Topaz, or just over €3.5 million. Yet buying 10 per cent based on the valuation O’Brien paid IBRC would have suggested a figure of closer to €15 million.

O’Neill has had his fair share of business success, independent of his uncle, but there is no denying he landed on his feet with a 10 per cent stake at that valuation.

Then again, one would expect the chief executive of a company to have the right to obtain shares at a reduced price. It’s all about aligning interests.

Since taking over the management, he has set about revamping its retail offering, rolling out the upscale Re.Store brand across its network of forecourts.

As an aside, O’Neill’s Twitter profile includes a link to Kouchin’s website, which consists simply of the company name and a picture of a bull. Kouchin is, of course, also the Japanese word for pay.

Pay the bull? There are strains of Gordon Gekko in that one.