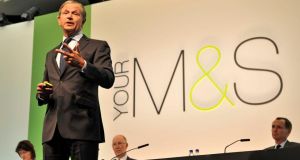 A cheer echoed around Wembley Stadium, the home of English football, yesterday morning, not in celebration of a goal but in response to news from Marks & Spencer that 80 per cent more of its dresses will have sleeves next season.

Wembley was M&S’s new choice as the venue for its annual grilling by shareholders, replacing the Royal Festival Hall, which it has used in recent years. Unfortunately, the story from M&S was the same as it has been for the past two years – earlier in the day, chief executive Marc Bolland reported the retailer’s eighth consecutive decline in general merchandise sales, largely clothing but also taking in home and footwear.

The cheers at Wembley were few and far between as shareholders bombarded the board with the somewhat eccentric mix of questions we’ve come to expect at M&S agms, from the state of the toilets at its flagship Marble Arch branch to the lack of staff in its stores and a call for champagne for shareholders to celebrate Andy Murray’s Wimbledon victory.

And, of course, they wanted to know when sales on the clothing side will start to improve. M&S did its best to pre-empt many of the questions on clothing, treating shareholders to a catwalk show to display its crucial new autumn-winter ranges, which will start appearing on the rails at the end of this month.

As well as sleeves, they were promised longer hemlines, bolder colours, more tailored trousers and more silk and cashmere. M&S’s new style boss Belinda Earl, formerly of Debenhams and Jaeger, scoured the M&S archives for inspiration when creating the new ranges and they have been well-received by the fashion press. But will they be enough to reverse the two-year decline in sales for M&S?

Bolland certainly appears confident they will but yesterday’s lacklustre trading update makes his task all the harder. The 1.6 per cent drop in underlying general merchandise sales in the most recent quarter is undoubtedly an improvement on the 6.8 per cent decline seen a year ago, but that’s still a long way from an acceptable performance.

Food did well, rising by 1.8 per cent on a like-for-like basis and online sales surged by almost 30 per cent. There was an element of catch-up in this, as M&S is well behind other retailers online, but it could also be a reflection of shoppers preferring to avoid M&S’s cluttered and confusing stores.

Investors are still giving Bolland the benefit of the doubt, although about 5 per cent failed to back his reelection as a director. The next six months are crucial for the group and its chief executive. Unless sales start moving by the end of the year, Bolland almost certainly won’t make it as far as next summer’s annual meeting.

Surprise move
One candidate touted as a replacement for Bolland has taken herself off the job market, however. In a surprise move, former WH Smith chief executive Kate Swan has joined the private equity-owned food franchise operator, SSP, which runs restaurants and food outlets in airports and railway stations around the world.

There had been speculation that, having successfully turned round Smiths, Swann would be snapped up by a larger retailer in need of some help. Along with M&S, Home Retail Group, owner of Argos and Homebase, was thought a possibility. But the move to SSP, although unexpected, makes perfect sense. Like Swann herself, it’s low profile but a big hitter, with sales of £1.7 billion and 30,000 employees worldwide. Some 10,000 of these are in the UK and Ireland, where SSP operates over 10,000 outlets from central London rail stations to Dublin and Manchester airports. These include M&S Simply Food, Burger King, Starbucks and YO! Sushi.

Swann already has links with SSP, which was bought by the Swedish private equity firm SSP in 2006 after being spun out of the catering group Compass.

During her 10 years at Smiths, Swann expanded the retailer’s travel division and nine outlets in the UK and Scandinavia are operated by SSP. Swann’s arrival at SSP has heightened speculation that the business is being groomed either for a sale or a stock market float.

A float with Swann at the helm would certainly be good news for the balance of women in the boardroom, depleted not only by her departure from Smiths but by the recent exits of Majorie Scardino at Pearson and Anglo American’s Cynthia Carroll.