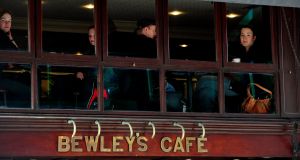 Customers enjoy a last few moments at Bewley’s on Grafton Street ahead if its closure for a six-month refurbishment. Photograph: Aidan Crawley/The Irish Times 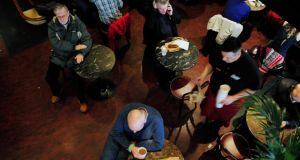 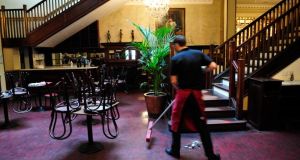 An employee of Bewley’s on Grafton Street sweeps up ahead if its closure for a six-month refurbishment. Photograph: Aidan Crawley/The Irish Times 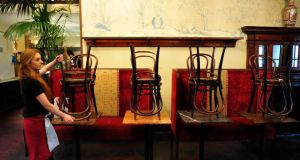 A staff members stacks chairs at Bewley’s on Grafton Street ahead if its closure for a six-month refurbishment. Photograph: Aidan Crawley/The Irish Times

“A little piece of Dublin going away from us” was how one customer described the final day of Bewley’s Café on Grafton Street in its current guise.

The cafe will shut its doors on Friday at 3pm for six months while it undergoes a €1 million revamp. It is the most significant change in the café’s 90-year history on Grafton Street.

Plans for the redevelopment will see the seating capacity halved and a more limited menu.

The 140 staff will be made redundant on Friday and there will be jobs for just 70 employees when it reopens at the end of the year.

Mark Lalor said he had been a loyal customer for more than 50 years and had come to the café to wish its staff the best in their futures.

“It’s like a wake in there today. I hate seeing it going but hopefully it will be reincarnated into something better. Many of the staff are from around Europe, I hope they’ll stay,” he said. “It looks pretty much the same since the 1960s. The decor is still much the same.”

Mr Lalor said one of his fondest memories would be the smell of roasting coffee “wafting through the street”.

“Change has to happen. But it’s nice to come here today to see it one last time,” he said.

Long-time customer John Botos said he was shocked the final day of the Dublin institution was so “low key”.

“I thought there would be crowds of people here. I was very surprised when I heard of the ending of such an iconic building-not what I expected. It’s a little piece of Dublin going away from us,” he said. “It is the first time in all my years of going to Bewley’s that there is no flower on the tables. It’s sad to see it go.

“It’s gone with a whimper, almost apologetically. The back and upstairs are closed off, everyone is pushed towards the front. The chairs are stacked on the tables. It’s all over.”

Mr Botos said it was he had many special memories of the café through the years from all night breakfasts to an impromptu performance from a Czech violinist one Christmas Eve.

“That is Dublin. It’s a little piece of Dublin going away from us. It’s like looking at shadows of the past in there today; people are having lovely conversations about their experiences through the years,” he said. “I came down to take photographs so people don’t forget what was once here.”

Staff smiled cheerfully as a constant flow of the customers came in to wish them well on their futures and thanking them for their service. There were many hugs as people looked around the café taking in the view for the last time.

A man was out front already ensuring the building would be locked securely was the shut down deadline was reached.

Serena from Dublin said she had gone to the café every morning for years and would miss it dearly. “It’s the end of an era really. I’ve just said goodbye to the staff. It’s very sad and hard on everyone today,” she said.

Many people oblivious to the closure were disappointed there were no hot breakfasts were available. Take away coffee and tea, pastries and baked goods were on offer for the day.

Mark MacClancy said more should have been done to keep the café open and he was disappointed it was closing. “I think it’s a disgrace. Very sad it’s happening. It’s such an iconic building in Dublin, a part of history. It’s an absolute tourist haunt,” he said. “I understand the rent is an issue but the Government should subsidise it. What is going to be the alternative put here we’re all wondering?

“There will be about 15,000 tourists walking through here tomorrow (Saturday) for the rugby, all that potential trade and no Bewley’s. They should have tried harder to hang on.”

John Hannigan said he had come down for one last hot breakfast and to say farewell to the staff.

“The last breakfast wasn’t to be. In my 20s I came here for late night breakfasts, they were great,” he said. “You get to know the different people working here. Another local business closing. I’ll be back when it reopens but it won’t be the same.”

A group of girls visiting the city for the day thought did not believe the café was shutting down when they were told.

“I thought it was a joke. That’s a shame. We’ve always come here,” she said. “We’ll just have to find somewhere else to go now. Although it’s exciting what might be here next.”

The upper floors of the building once housed Whyte’s Academy, a grammar school established in 1758, with former pupils including Thomas Moore, Robert Emmet and the Duke of Wellington.