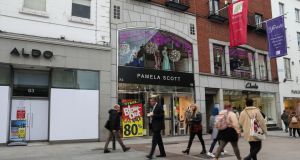 The Pamela Scott store on Grafton Street in Dublin is among the shops affected. Photograph: Crispin Rodwell

The High Court has appointed provisional liquidators to two related companies that operate 13 Pamela Scott and Richard Alan retail stores across the Republic.

The court heard the companies sought to be liquidated after coming under pressure from landlords, changes to the wage subsidy scheme, a sustained reduction in footfall, and further restrictions expected imminently due to the increasing number of Covid-19 infections.

The firms are Arzac Developments Ltd, which operates 10 of the Pamela Scott stores in Ireland, and Richard Alan & Co, which had operated three stores.

The two companies are both owned by Dublin-registered Flairline Fashion Ltd and employ 104 people.

The companies said that in recent years they have been experiencing a challenging environment due to changes in customer shopping habits, and increases in operating costs.

Their difficulties have been exacerbated as a result of the Covid-19 pandemic, and the firms are now insolvent and cannot continue to trade, they said.

Represented by Ross Gorman BL, the companies said, having considered all the options available, it is in the best interests of all creditors the firms be wound up in an orderly fashion.

Both companies were reliant on Flairline for services including administration, financial and business support. The firms, counsel said, can no longer rely on these services from its shareholder and their financial situations continued to deteriorate.

The directors of Flairline are all members of the Barron family, and the company secretary is John Barron of Grove Lawn, Blackrock, Co Dublin.

After appointing the provisional liquidators, the judge returned the case to November.

In a statement issued separately to the court proceedings, Flairline managing director Richard Barron said the development was “devastating”.

“It is devastating to have to close shops and in particular to have to say goodbye to so many of our employees, some of whom have been working for Pamela Scott for decades. Extraordinary times require extraordinary measures and we feel this is the very best way of protecting not just one of Ireland’s oldest and largest fashion chains, but the livelihoods of our remaining 90 employees,” Mr Barron said.

“When it comes to high street retailing in general, and fashion in particular, you have to adapt or face extinction. Pamela Scott has repeatedly adapted both to changing customer tastes and to changing market conditions. We are confident that this restructuring will allow us to continue to bring the very best of Irish and international fashion to our Irish customer base for many years to come,” he added.