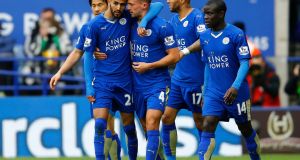 This column should begin with a financial disclosure -- of the writer’s own ineptitude. For around 20 years, every August I have bet £20 on Leicester City to win their league. The wall of my office at The Economist in London was festooned with the resulting betting stubs, to be mocked by my colleagues who followed more successful teams. True, Leicester did once finish second -- but that was back in the 1928-29 season; their main battle in my lifetime has been to avoid relegation, a struggle they have lost seven times.

Last summer, having moved to New York to work for Bloomberg, I missed making my routine bet; the odds being offered on Leicester winning the title were 5,000-1, but, somewhere deep down, I assumed it was £20 saved.

A huge mistake. With three matches to go, Leicester stands seven points clear at the top of the Premier League. If I had bet on Leicester, I would need to keep the ticket in a bank vault: it will be worth £100,000 if the team wins just one of its remaining three games (and Leicester may not even need to do that if the second-placed team, Tottenham Hotspur, slips up).

Earlier this month, fearful bookmakers started offering Leicester fans the chance to cash in their betting slips early for around 75 per cent of their potential value.

Having supported Leicester for nearly half a century, having sneaked into a recent home game disguised as a Southampton supporter (the only ticket available), and even having bet on Emile Heskey, a notoriously inaccurate Leicester striker, to be top scorer in a World Cup, this columnist is obviously hopelessly biased as well as financially incompetent. But please accept two mathematically proven truths. The first is that, if Leicester hangs on to win the Premiership, my team will have pulled off the most outrageous surprise in modern team sports. The second is that Leicester will have done so by applying scientific management to the least scientific of activities.

The first truth can be proven by the odds. Nothing in American sports comes close. Judged on their gambling prices, both the Philadelphia Phillies and the Atlanta Braves are pretty useless at baseball, but as spring training dawned you could only get odds of 500-1 on them to win the World Series. Leicester was deemed 10 times less likely to win the Premiership. By way of contrast, bookmakers think that Bono stands a 5,000-1 chance of being the next pope.

The long odds last summer reflected a couple of realities. For starters, the Premier League, the most watched in the world, is an oligopoly: Four big clubs -- Manchester United, Chelsea, Manchester City and Arsenal -- have won all the titles in the past 20 years. The big four in England get most of the television revenue (especially once you add in the European Champions League) and they have some of the biggest stadiums so they can buy the best players and pay them better wages -- and there has been a very high correlation between wage bills and league position. Last year’s Premier League winner, Chelsea, spent £215 million assembling its squad, roughly 10 times the cost of Leicester’s team.

The other justification for the long odds is that last summer Leicester looked pretty useless. They had just achieved one sporting miracle, somehow avoiding being one of the three clubs that were relegated, despite being bottom for most of the season. “The Great Escape,” as it was known, saw Leicester win seven of its last nine games, an amazing feat for a struggling team. But miracles don’t tend to happen twice­ -- and in the off-season Leicester lost its manager, Nigel Pearson, and arguably its best player, an elderly Argentine by the name of Esteban Cambiasso. In Pearson’s place, the club’s Thai owners hired a much loved Italian coaching veteran, Claudio Ranieri, who has never won any major league. Given all that, 5,000-1 did not seem absurd odds.

So how have they done this? Luck has played a role. The main clubs have all had appalling seasons: Chelsea, which sacked its manager, is currently in ninth place; Manchester United is in fifth place and Liverpool, the other big club, is seventh. All have been hit by injuries and all have played huge minutes in non-league games. Leicester, by contrast, has had very few injuries and was (paradoxically) fortunate to get knocked out of the domestic cups quickly. Ranieri has thus been able to field the same team week after week, the one big disruption being the sending off, in dubious circumstances, of their goal machine, Jamie Vardy, which meant he missed last weekend’s match. (They still won 4-0.)

Where, then, is the scientific management? One clue can be found in the astonishing job Leicester has done buying players. The club’s scouts found Vardy playing non-league football and paid £1 million for him, while Riyad Mahrez, a pencil-legged Algerian, was plucked out of the French second division for half that amount. Several of Leicester’s players came in on free transfers, because they had been rejected by their previous clubs, mostly for being too old.

There is thus an element of the Dirty Dozen about Leicester -- a group of ne’er-do-wells trying to steal a fortune. It has become every football fan’s second team not just because Leicester gives every football fan some hope, but also because, under the avuncular Ranieri, its players seem unusually team-like and free of the sort of egos that bedevil professional sports.

But there was mathematics behind this, as well. A little like the Oakland Athletics, the baseball team that Michael Lewis chronicled in “Moneyball,” Leicester’s scouts were obsessed with statistics. N’Golo Kante, the midfielder they bought last summer, was not well-known, but he had topped the French leagues two years in a row for the number of interceptions he made. The numbers also detected that Mahrez had a rare ability to dribble past people. Another focus of the scouts has been speed: Leicester has several of the fastest players in the Premier League.

Once they have the players, they follow their statistics relentlessly, with match data kept on tablets. The team looks at what players do in the 10 seconds before and after they touch the ball. Leicester players even seem to foul scientifically, slowing down their opponents by taking turns to obstruct them, so that few of the Leicester players get booked or sent off.

Some of these science-based ideas predated Ranieri, but he has embraced them, becoming the Frederick Winslow Taylor of football. In business history, Taylor is the first proper management guru, the man credited with inventing stopwatch management, management consultants and sundry other evils. Before Taylor started spouting his ideas at the end of the 19th century, nobody assumed there was much of a science to business. But Taylor, a mechanical engineer by training, argued you could improve productivity and companies by measuring how long it took factory workers to do individual tasks (hence the stopwatch) and then redesigning workplaces and management practices. It was Taylor’s scientific ideas that Henry Ford and other American industrialists spread round the world. Though Charlie Chaplin satirised them in “Modern Times,” they proved astoundingly successful.

In Ranieri’s case, the end product is not a car but the rapid counterattack. This in itself is another innovation. All teams have always counterattacked, but few have based their game so completely around it. In most matches, the team that keeps control of the ball more scores more goals. Teams like Barcelona and Arsenal are famous for never letting their opponents touch it. Not Leicester. Last weekend, Swansea had possession 62 per cent of the time, but they still lost 4-0. Leicester’s tactic is to let their opponents have the ball, wait until they make a mistake and then attack at remarkable speed: Hence all those quick players and the unusual disciplined approach.

Will Leicester win the premiership? Being a Leicester fan makes you a pessimist. Even now, the supporters’ favorite song is “We’re Staying Up” rather than “We’re Going to Win the League.” Tottenham has an easier road ahead. There is the persistent fear that it will go wrong. When it does so, I will be heartbroken, but at least I will have saved £20.