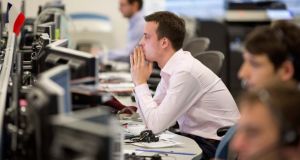 The banks sold 19.9 million shares at 245 zloty each to financial investors in a transaction that ended yesterday, Zachodni said in a regulatory filing today.

The offering took the value of this year's share offerings in Poland to 14.4 billion zloty, a record start of the year, according to data compiled by Bloomberg.

Santander sold 5.2 per cent of Zachodni, cutting its holdings to 70 per cent, while KBC sold its entire 16.2 per cent holding in the Polish bank.

Allied Irish Bank was also previously a majority shareholder in Bank Zachodni but sold its 70 per cent stake for €2.9 billion in 2010 to raise new capital.

Santander, which completed Zachodni's merger with KBC's Kredyt Bank in January, was under pressure from Polish regulators to boost the proportion of Zachodni shares which are available to other investors.

The sale increased the Polish bank's free float to 30 per cent. The offering came two months after sales of stakes in PKO Bank Polski and Bank Pekao, Poland's largest lenders.

The government and state-owned Bank Gospodarstwa Krajowego sold a 5.24 billion-zloty stake in PKO Bank, while Italy's UniCredit sold a 3.73 billion-zloty holding in Pekao in January.

Zachodni shares fell 0.2 per cent to 255 zloty yesterday, trimming this year's gain to 5.4 per cent.