The world of retail is changing rapidly, according to the Wicklow-born chief executive of supermarket giant Morrisons 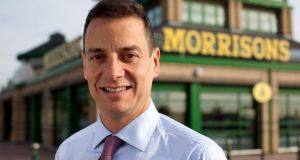 From the top of London’s Centrepoint tower on a sunny day, you can see for miles, which is just as well when you are Dalton Philips, the Irish chief executive of one of Britain’s biggest retailer, Morrisons, as he surveys the shopping landscape ahead.

Unlike some other retailers, the Wicklow-born businessman has consistently argued that supermarkets should never become too big, or expand too far into selling products other than food.

“We are not saddled with a large network of hypermarkets – white elephants which are expensive to run and don’t meet the needs of today’s customers. Hypermarkets, as I’ve said before, are going to be a blip in retail history,” he declared.

In time, there will be casualties, since the premium size for a supermarket is 38,000sq ft for food, he said: “After that, you simply start replicating lines. What happens to all that white space out there when 20 per cent of sales move online?”

However, Philips is not averse to change. By 2017, £11 billion worth of food will be bought in Britain online and delivered to homes – a business which Morrisons is now entering after agreeing a piggy-back deal with Ocado.

Some of the changes taking place are structural and permanent, he believes: “Growth in core supermarkets – essentially our only channel today – was negative on a like-for-like basis across the industry last year.”

The pace is accelerating. In 2009, online accounted for 9 per cent of retailers’ turnover, while 24 per cent was taken by convenience shops.

Today, those numbers have risen to 14 per cent and 30 per cent, respectively.

“In a retail business, indeed any business, you need to be where the growth is. And it was clear we were not,” he said.

In the eyes of some analysts, Philips has tied himself into a 25-year-long, £30 million-a-year licensing deal to use Ocado’s software that could prove a millstone, but he rejects the charge: “We spend more on tyres for our trucks.”

In the past, online groceries have been seen as an upmarket experience, illustrated by Waitrose’s tie-up with Ocado, but Philips insists the market will prove much deeper in time.

Based in Bradford in Yorkshire, Morrisons is Britain’s fourth-largest food retailer, with £18.12 billion in sales in the year to February, though its growth, say analysts, is coming from adding new stores, not increased sales .

Hundreds of millions are being spent to upgrade its back-room systems.

Outdated methods
“We’ve been running a 21st century business on systems and infrastructure firmly stuck in the 20th century. Cash takings were counted every night in every store by hand – quite an undertaking.”

“It is the most advanced rebuilding of retail systems anywhere in the world. When completed, our business and stores will go from having the worst systems to the best, leapfrogging a generation.”