Inditex has edge over H&M as online battle grows 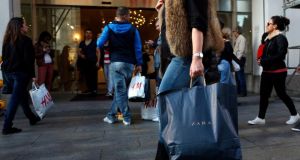 The families behind Zara-owner Inditex and H&M will need to fend off fast-moving competitors if they are to replicate online the winning formulae that made them the world’s top two fashion retailers.

Each has borrowed ideas from the other but their business models are quite distinct, which could put Inditex in a stronger position to tackle digital-only upstarts like Germany’s Zalando or Britain’s Asos.

H&M has moved into Inditex’s “fast fashion” space by offering a bigger turnover of styles, a strategy summed up by a slogan in an H&M store in Berlin: “New stuff comes into the store every day. Why don’t you too?”

Inditex, for its part, has launched a budget chain to try to compete with the lower prices of H&M and other fast-growing discounters like Primark and Forever21.

But by and large, each has stuck to its original approach, giving them unique advantages and disadvantages online.

“The higher the typical selling price of the product, the better for online growth and margins because a higher selling price can help the retailer to bear the cost of subsidised delivery,” said Société Générale analyst Anne Critchlow.

In H&M’s biggest market Germany, the Swedish chain charges €4.90 for delivery in three-five days, compared with €3.95 at Zara, which offers free delivery for orders over €50.

Neither can trump Zalando, which lures shoppers by offering free delivery within two days and free returns within 100 days.

Inditex now makes online sales in 27 of its 80 markets – compared with just 13 of 55 markets for H&M – although that accounts for about three-quarters of both their sales bases, a figure that will rise to about 87 per cent for H&M by the end of 2015.

The Inditex ecommerce rollout has been helped by the supply chain and centralised logistics it developed to deliver new lines to stores twice a week from huge warehouses in Spain.

Inditex and H&M’s share of global online sales of clothes and footwear is set to more than double to about $313 billion by 2018, or about 13 per cent of the total market, according to Euromonitor.

H&M, which operates from local warehouses in each of its markets, has had to invest in IT for each new online country. It plans to roll out ecommerce to another nine markets this year.

While neither firm gives figures, SocGen’s Critchlow expects ecommerce to reach nearly 8 per cent of sales at Inditex by 2020 and estimates that H&M could already be making 5-10 per cent of its sales online – helping drive 14 per cent revenue growth last year as web sales went live in France, Italy, Spain and China.

Online-only players are growing even faster, innovating with features like a new Zalando app that finds garments similar to those photographed by a user.

Zalando, launched in 2008, already ships 1,500 brands to customers in 15 countries and is the most visited fashion site in developed markets like Europe and North America, according to research, well ahead of Asos, H&M and Inditex. It aims for 20-25 per cent sales growth this year.

Inditex says it will roll out online sales to more countries but predicts it will not have to invest so much in future following big outlays on logistics in the last few years. It has also slowed the pace of store openings, focusing more on flagship sites.

“Growth will come from people buying on the web in small towns in the middle of nowhere where it doesn’t make any sense to open a Zara,” said Joe Haslam, associate professor at IE Business School in Madrid.

H&M has taken steps to improve the online experience, posting more and better photos on its sites and tweaking the search function but is grappling with the need to migrate its early ecommerce markets to a new web platform.

And it has yet to allow shoppers to pick up online orders in store, a service Zara already provides and which Bryan Roberts of consultants Kantar Retail says is essential to beat online-only players as it keeps costs low and gets customers into shops to buy more. “The end-game will be click-and-collect,” he said. – (Reuters)