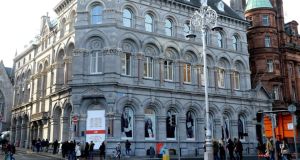 All things bank-related may have been seriously out of vogue these past few years, but there’s a growing trend for clothing retailers to set up shop in grand former bank buildings.

Fast-fashion giant H&M is following the lead of Abercrombie & Fitch, which is trading successfully in the old Bank of Ireland building on Dublin’s College Green, with the opening of a flagship store a few doors down in the newly refurbished former National Irish Bank. The Swedish retailer, loved for its low prices and high-profile celebrity collaborations, will throw open the doors of the 1864 corner building this Thursday.

The opening of the Abercrombie store caused minor chaos back in the winter of 2012, with hoards of teenagers queuing in the cold on opening day. However, the new H&M store is unlikely to cause such pavement congestion.

Firstly, although the building’s original front door is on College Green, most shoppers coming from the Grafton Street area are expected to use the main entrance on Andrew Street.

Also, the Abercrombie store was the US chain’s first in Ireland . H&M, by contrast, already has numerous Dublin outlets, including two city centre locations – South King Street and the Ilac centre. And one other tiny factor is that, unlike Abercrombie, H&M doesn’t employ shirtless male models (“shirtless greeters” – to give them their official title) to welcome shoppers.

This week’s opening is just the latest step in the expansion of H&M’s presence in the Grafton Street shopping precinct. Earlier this year the group launched a Cos outlet in the former Tower Records shop on Wicklow Street, and recently confirmed that its luxury brand & Other Stories will begin trading out of a top Grafton Street pitch – the former A/Wear store opposite Brown Thomas – next year.

European stocks and US futures tumble again over coronavirus fears