Ground Espresso sees Dublin as its Next step 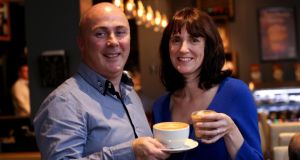 Karen and Darren Gardiner, proprietors of Ground Espresso Bars, which plans to create more than 100 jobs in the coming year as part of a multimillion-pound expansion plan that will include a unit in Dublin.

In addition it hopes to open two new outlets in Next stores in the North as part of a multimillion-pound investment plan with the British plc.

The firm, which is owned by Karen and Darren Gardiner, said it hoped to have three new stores in the Republic within the next 12 months, and it was currently negotiating for several sites here.

Ground Espresso Bars already has 11 standalone stores and concessions in Northern Ireland and employs 120 people. “This is a significant investment for a local company and we look forward to further investment and job creation in the coming months, with a multimillion-pound expansion plan with Next plc,” Mrs Gardiner said.

“We are currently finalising a further six locations across Ireland, which will create in excess of 100 new jobs in the next 12 months.

“Plans are underway for the expansion into new stores and concessions and we are delighted to be partnering with Next plc to open our first store in the Republic of Ireland, where works have already commenced in the first unit in Blanchardstown, creating 20 new jobs in the coming weeks.”

Mrs Gardiner said her company expected to invest about £1.5 million expanding over the next year. She said she was confident that the coffee market in the Republic could sustain a new player.

“The coffee market is still in its infancy when you look at trends in the UK, Europe, US and Australia, but we have a rapidly developing coffee culture and must highlight that coffee shops are aiding retail sales in town centres and filling vacant units across Ireland,” she said.

“We greatly admire already thriving coffee operators such as Colin Harmon at 3FE and Karl Purdy of Coffee Angel.”

Alongside its partnership with Next, Ground Espresso Bars also has concessions in a Waterstones bookstore and a large Spar service station in the North.

1 Google tells workers to return to country where they are employed
2 The Devlin hotel operator sues insurer over Covid losses claim
3 Sean Quinn stunned at rebranding of Quinn Industrial Holdings
4 Subway bread too sweet for the Irish tax authorities
5 Will tracker mortgage be at risk if Ulster Bank closes?
6 Recurring Covid restrictions will kill off many viable businesses
7 Leslie Buckley retires from Digicel board
8 Stillorgan apartment portfolio at €9.7m offers 5.5% yield
9 Whistleblower warned EY of Wirecard fraud four years before collapse
10 Michael O’Leary is the boss you want to lead an airline out of crisis
Real news has value SUBSCRIBE