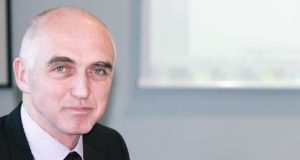 Eugene O’Brien: firm has bridge projects in Ireland, Britain, Denmark, Bhutan and Panama under its belt

Take one 40-year old civil engineering consultancy looking to shore up its future, combine it with two Irish academics involved in cutting-edge research and you’ll end up with a leading research company that provides clients with access to the very latest developments in bridge design. That, at least, is the aim of ROD Innovative Solutions (ROD-IS), set up as a subsidiary of Roughan O’Donovan in 2009.

O’Brien says ROD-IS is an innovative way of exploiting academic research. “We’ve formed [Roughan O’Donovan’s] research arm in order to push boundaries. It’s a spin-out but not in the official sense. I’m older and I was in business many years ago so I don’t feel the need for incubation.”

Roughan O’Donovan was originally set up in 1974 and provides engineering services in transportation, bridges, building structures and environmental areas. The company has developed a particular specialism in bridges, with projects such as the M1 Boyne bridge and Dublin’s Samuel Beckett and James Joyce bridges under its belt.


International markets
From 2008, the company has become increasingly focused on the international market, carrying out bridge projects in Britain, Denmark and Poland, as well as the more far-flung destinations of Bhutan and Panama.

Investing in R&D through the establishment of ROD-IS enables the company to offer their clients access to the new innovations in bridge design. “It provides a consultancy outlet for advanced research,” says O’Brien. “Consultancy is about selling expertise. It gives us more skills in our toolbox and better prepares us for the international market.”

ROD-IS also provides a means of commercialising research that may otherwise end up on the shelf, a goal that is being pushed by the EU through its Horizon 2020 programme.

“Ninety-nine per cent of all research ends up on the shelf. Academics publish, but no one reads it except other academics,” says O’Brien.

Much of the research carried out by ROD-IS focuses on the safety of bridges. “Around Europe a lot of bridges were built after the second World War,” says O’Brien. “There’s a question of when to replace them. If you can calculate that correctly, you can keep them open longer, save money and reduce your environmental footprint. Concrete and steel are energy-intensive products so building a new bridge when it is not necessary is environmentally unfriendly, as well as being costly and disruptive to road or rail traffic.”

In 2011 ROD-IS received a grant of €890,855 from DG R&I, the EU’s research and innovation arm, for a project to explore the lifespan of bridges. The money was split between ROD-IS, two Scandinavian universities and a French company, and used to fund secondments of staff between the institutions to share research.

One element of the project explored a new way of modelling the traffic load on bridges. ROD-IS has developed a micro-simulation model that can be used to simulate a hundred year’s worth of traffic on a bridge to more accurately estimate its safe lifespan.

Another successful output has been the production of a double-tuned mass damper, a mechanism that reduces the harmful vibrations on railway bridge cables.

Testing on a railway bridge in Ånge, Sweden, showed that vibrations were reduced by 20 per cent, thus decreasing the potential for fatigue on bridges caused by the speed, frequency, size and weight of modern trains.


Research contracts
In the future ROD-IS intends to build on its existing consultancy work in Ireland, Scandinavia and the Middle East as well as collaborating on further research.

It recently won four research contracts supported by the Conference of European Road Directors to look at issues including how to build roads that are in harmony with wildlife and how road owners can best assess the risk of ageing infrastructure.

O’Brien says the nature of exploratory research means that while parts of it may be ready for commercial use immediately, others may take years to come to fruition.

But, he says, how we apply research should not always be predetermined.

“There is an increasing emphasis on commercial applications of research but this doesn’t necessarily mean research should be more applied. When lasers were developed, people had no idea what they would be used for. Now they’re used all over.”

1 Michael Smurfit: ‘I asked Trump to invite me to the White House for my 80th birthday’
2 Small businesses are cannon fodder in zealous anti-virus experiment
3 ‘I’m so lucky to be in the Caribbean – a million miles from Derry Girls’
4 Ireland stands to benefit in a big way from investing in public transport
5 Charlie Chawke plans 290 apartments and hotel on Goat pub site
6 Covid-19 crisis to trigger 20% fall in FDI
7 Virgin Media’s Gavan Reilly named most influential Irish journalist on Twitter
8 Revenue fears fraudsters tapped bank details of 3,000 taxpayers
9 Tax and the Pandemic Unemployment Payment: Your questions answered
10 Irish business of Carluccio’s restaurants to be wound up
Real news has value SUBSCRIBE