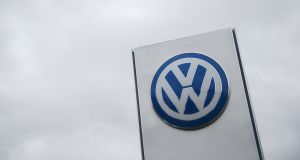 Last year, Volkswagen advertised for a dealer for the south Dublin area after MSL decided not to renew its dealer contract. Photograph: Suzanne Plunkett/Reuters

Motor dealer Frank Keane is set to take sole control of Volkswagen sales and service operations in south Dublin, replacing the firm that originally brought the brand to Ireland.

Volkswagen cars and commercial vehicles are currently sold in south Dublin by the MSL Motor Group, through its Grange Motors, Deansgrange, and MSL Ballsbridge outlets, along with a service centre in Dún Laoghaire. MSL is part of O’Flaherty Holdings.

However, responsibility will transfer to Frank Keane (South Dublin) Ltd from May 1st, provided the move is approved by the Competition and Consumer Protection Commission. It is believed the new firm intends to operate temporarily from the Grange Motors facility under a rental agreement with MSL.

Last year, Volkswagen advertised for a dealer for the south Dublin area. It is understood this followed a decision by MSL Group not to sign up to significant new investment plans required by VW Group in order to renew its dealer contract.

The group retains a Volkswagen franchise at its Park Motors outlet on Navan Road, Dublin. MSL also has Mazda, Skoda and Hyundai franchises at its various sites in Dublin.

Along with the MSL car retail business, O’Flaherty Holdings also owns the distribution rights for Mercedes-Benz vehicles in Ireland. It has a long history with the Volkswagen brand, dating back to the 1950s when it assembled Volkswagen Beetles in Ireland – the first to be put together outside Germany.

In October 2008 it sold the national distribution rights to the Volkswagen, Audi and Skoda brands in Ireland to VW Group Ireland, a subsidiary of the German car giant.

O’Flaherty Holdings Ltd reported an operating profit of €15.6 million in 2014 on revenues of €350 million. It employed 1,110 staff across its businesses. It is controlled by members of the O’Flaherty family.

Long-established car dealer Frank Keane already operates a sizeable Volkswagen dealership in Liffey Valley, along with BMW and Mini outlets on the Naas Road and in Blackrock, where it took over the operations of Maxwell Motors in 2011.

It held the Irish agency for BMW in Ireland from 1967 until 2003, when the national franchise was sold back to the German manufacturer for €7 million.

1 How well paid do you think you are? Here’s how to work it out
2 Life as a Facebook moderator: ‘People are awful. This is what my job has taught me’
3 Dublin down nearly 4% as coronavirus hits markets
4 Wealthy investors’ legal challenge against Revenue fails
5 Accumulated profits at Marian Finucane firm exceeded €830,000
6 Flight attendent seeks High Court injunction against Aer Lingus
7 AIB to sell more than 500 ATMs to Brink’s
8 Former top Department of Finance official David Doyle dies aged 70
9 Citi names Limerick native Cecilia Ronan European unit chief
10 Coronavirus and the etiquette of working from home
Real news has value SUBSCRIBE