Judge says move would be ‘premature’ and suggests negotiation with landlords 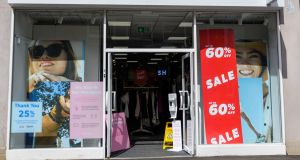 The High Court has refused to appoint an examiner to the Irish arm of the New Look fashion retailer as it would be “entirely premature”.

New Look Retailers (Ireland) Ltd, which operates 27 stores and employs 475 people, sought the protection of the court in August so it could have time to address financial difficulties and losses caused by the fallout from the Covid-19 pandemic.

In particular, the company wanted, as part of the examinership process, to seek reductions in rent or possible repudiation of some leases due to the fact many of them were of the “upward only” rent review type.

New Look claimed they were substantially above-market rents for retail and it had to stop paying rent during lockdown and only made a contribution after stores were allowed to reopen.

They expressed concern the company had sought to “contrive” insolvency for the purposes of using examinership to reduce its long-term liabilities even though its business was profitable for the last two financial years and had cash reserves of around €15 million.

On Wednesday, Mr Justice Denis McDonald said it was “entirely premature” to consider appointing an examiner and the company failed to demonstrate it was necessary at this time.

In expressing that view, he said, he was not suggesting the directors should necessarily have to wait until the company reaches “the edge of the precipice” before seeking the protection of the court.

But it was entirely inappropriate that this jurisdiction should be invoked when there is “an alternative and obvious route available to the company to seek to deal with its landlords – namely negotiation.”

On the basis of the evidence before the court, it was inexplicable that the company did not take more proactive steps during lockdown (March to August) to resolve differences with landlords, he said. There is still time for serious negotiations before insolvency looms more immediately in sight, he said.

Those negotiations may fail and an application to the court may have to be made in the future but no real attempt has been made to date to negotiate, he said.

The judge also said it was troubling that the examinership petition was presented, and an interim examiner appointed, “on an erroneous case put forward by the company that it faced insolvency as early as October 2020”.

However, he did not believe it was necessary to consider whether there was a basis to make an adverse finding against the company on that ground.