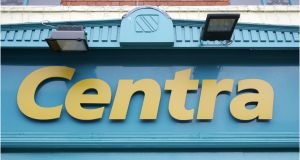 The retailer, which is part of the Musgrave group, said sales of almost €33 million per week represented growth of 4 per cent on the previous year. That compares with 3 per cent growth achieved in 2018.

The company does not disclose profit, which is accounted for in the wider Musgrave group.

Improvement in Centra’s revenue was driven by a number of factors, it said, including its Inspired By range, which recorded about €20 million worth of sales last year, according to the brand’s managing director Martin Kelleher.

“Inspired By is our top-tier own-brand line and what’s been super successful is the in-store prepared salad bowls,” Mr Kelleher told The Irish Times in advance of Centra’s annual conference being held in Killarney on Monday.

Elsewhere, the company’s coffee brand Frank and Honest posted 19 per cent growth in the year and now has two standalone coffee outlets.

Mr Kelleher said the company’s plan is to build a “full end-to-end coffee brand” which would see further stand-alone Frank and Honest outlets alongside its development of coffee capsules and other paraphernalia such as reusable cups.

Centra, which now has 473 stores in the Republic, operates on a franchise model, where independent retailers control outlets using the brand, with support from head office.

The convenience retailer anticipates 20 store openings this year which, it says, will add 480 jobs to bring its total head count above 11,000.

In line with changing consumer trends, Centra has moved to enhance its healthy food-to-go offering, which it says has delivered sales growth across its estate.

Centra stores are spread across the State, but Mr Kelleher suggested that growth for the brand will come from the greater Dublin area as population growth is concentrated there.

Its retailers will collectively spend €27 million on new stores and revamps, he said, noting that the company completed 75 revamps in 2019.

“There’s a huge amount of positive momentum in the brand,” he said, adding that last year was “a sticky enough year from a consumer confidence perspective” with issues like Brexit troubling shoppers.

Government should set a benchmark for any permanent increases in spending 05:50
Norwegian airline sued in Dublin by inflight caterer 05:37
Homeworking is depriving me of juicy gossip 05:30
Companies cutting IT investment when they need it most, warns PwC report 05:30
‘I set up an investment club many years ago with a bunch of friends’ 05:20

1 Majority of employees don’t want to return to pre-Covid working patterns
2 ‘My rent here is so low it’s a joke’
3 If tourists are such pariahs should we not be testing them on arrival?
4 Investors in Irish solar energy fund in line for €20m payout
5 Varadkar and Donohoe to meet banks to discuss mortgage breaks
6 Tobacco giant’s menthol-ban substitutes take 5% share of Irish market
7 Norwegian airline sued in Dublin by inflight caterer
8 Companies cutting IT investment when they need it most, warns PwC report
9 ‘I set up an investment club many years ago with a bunch of friends’
10 Goodbody’s planned €155m sale to Bank of China falls through
Real news has value SUBSCRIBE