C&C gets on the hog’s back 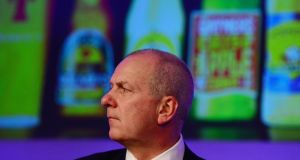 Anybody who has ever drunk a flagon too many of cider will confirm that the stuff can indeed make you chippy, if you’re not careful with it. So it’s not a complete surprise that C&C, the maker of Bulmers/Magners, has become embroiled in a cider row with a small, British outfit called Hog’s Back Brewery.

Hog’s Back, chaired by veteran British craft brewer Rupert Thompson, is upset with C&C over what it claims is a trademark infringement of its tipple, Hazy Hog, which at 5 per cent alcoholic strength is proper crazy juice.

It has filed an infringement case against C&C, which is led by Stephen Glancey, over the launch of the Irish company’s Cider Hog drinks dispenser, which it claims could confuse customers.

The courts beckon although talks are ongoing. Perhaps they’ll sort it out over a pint. C&C, however, maintains there is no trademark infringement: “One is a drink and the other one is a dispenser and there is no similarity in design.”

Which brings to mind the brand name of the latest cider release of C&C’s US arm: Gumption.