Billionaire Aldi brother kept it simple to the end

Karl Albrecht, who died last week, was a symbol of German efficiency and thrift, despite being named as the country’s richest man 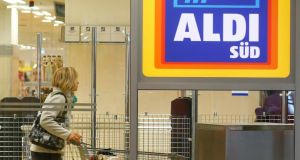 In 1960 Karl and Theo Albrecht drew the “Aldi equator” horizontally across the map of Germany. Everything north of the Ruhr went to Theo – Aldi Nord – while the south went to Karl’s Aldi Süd, the company that later expanded to Ireland. Photograph: Getty 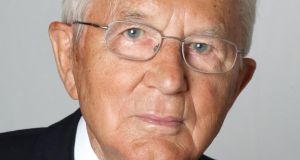 Karl Albrecht: After his burial last week his family ended decades of speculation and released a photo. Photograph: Aldi Süd/DPA

Shortly before he died last week aged 94, Karl Albrecht did something he hadn’t done in 61 years: he gave an interview. The co-founder of the Aldi retailing empire was Germany’s richest man with a fortune estimated at €20 billion but, Forbes magazine complained, “more elusive than the Yeti”. Year in, year out the magazine was forced to reprint the same fuzzy, dated photograph alongside Mr Albrecht’s entry on its world rich list – he most recently at number 24.

After his burial on Monday his family ended decades of speculation and released a photo. The Frankfurter Allgemeine (FAZ) daily – for decades his newspaper of choice – published an interview it had conducted a few weeks earlier with this embodiment of German efficiency and thrift. Albrecht said the Aldi retail revolution – over 10,000 outlets worldwide and counting – was about taking a simple concept and running with it.

“I had luck, a lot of luck ... and I wanted to be big,” said Albrecht to the FAZ. “I could have done something else (other than grocery retailing) but I realised already as a child that grocery retail can grow even in times of crisis.”

Their parents set up a grocery shop in Essen in 1913. Behind the counter Karl and his brother Theo, born in 1920 and 1922 respectively, witnessed first-hand the horror of Weimar-era hyper-inflation as customers tried to buy something, anything, before their money became even more worthless. The second crisis – the almost complete destruction of Essen, one of Germany’s industrial capitals, in the second World War – provided the Albrecht brothers with their chance.

After returning home from war service, and a time in POW camps, the brothers realised the future of grocery retailing was in chain stores and, by 1950, had 13 outlets. Unlike their parents’ traditional store – lots of staff with goods behind the counter – the Albrecht Discount or Aldi concept was based on self-service and limited inventory meaning low store overheads and, as a result, low prices.

“It was so clear, so simple, that anyone could have done it,” said Albrecht before his death. “(But) I believed in my idea and implemented it consequentially.”

By cutting out all unnecessary costs, and passing the savings on to customers, the Albrecht brothers hit the jackpot by tapping into the cost-conscious German psyche.

Their firm kept growing but in 1960, to keep things manageable, they drew the “Aldi equator” horizontally across the map of Germany. Everything north of the Ruhr went to Theo – Aldi Nord – while the south went to Karl’s Aldi Süd, the company that later expanded to Ireland.

A decade on they were Germany’s richest men, but wealth came at a cost. In November 1971 Theo as kidnapped on his way home from work but, throughout the 17-day ordeal, the Albrecht brothers stayed true to their business principles. After reportedly haggling the kidnappers down to a seven million deutschmark ransom, the duo later won a legal battle to classify the payment as a tax write-down.

The fear of another kidnap saw the Albrechts withdraw from public life, guarding their privacy with the same obsessive approach they used to ensure low prices. The Albrecht brothers lived near each other in Essen and, until Theo’s death four years ago, had lunch together on Sundays after mass in the district of Bredeney.

Though one of Essen’s most salubrious neighbourhoods, walking down its main street is like a 1980s West German time-warp populated by an army of beige-clad pensioners. The local shoe shop specialises in brown and beige models that, according to the window display, “correct posture”.

On the main street is a small delicatessen where Karl had his first job in the 1930s, and where, in later years, he continued to buy his cold meat and salads. “I was surprised and sad when I heard about his death,” said Lutz Weiler, the current owner, to The Irish Times. “The whole generation that helped rebuild Germany after the war is departing. They’re a different breed to the managers today.”

For many, Karl and Theo Albrecht encapsulate a tough generation for whom thrift was first a necessity and later a lifelong virtue. To this day it remains at the heart of Aldi’s corporate DNA.

Like the Albrecht’s outlook on life, their stores, from the floor tiles to the cash registers, can be described in one German word: schlicht. It’s a neutral word that lingers in English somewhere between plain and frugal. And even when Aldi made the leap from retailer to cult, the Albrechts remained modest to the end.

“Wealth means little to me,” said Karl Albrecht before his death, “unlike the freedom and independence that wealth brings with it.”

Germany’s richest man believed in mass on Sunday, midday naps and swam daily. He also played golf so compulsively that, to save money on club fees, he built his own golf course and adjoining hotel – his one luxury in life.

Aldi Nord and Süd are famously discreet, privately-held companies comprised of dozens of regional sub-companies - none of which publish any accounts. Total worldwide turnover is estimated at €67 billion, with €30 billion turnover alone in Germany and a combined profit of €1.5 billion. Karl Albrecht left behind a fortune estimated at between €18 and €20 billion.

Applying the Aldi principles to managing his wealth, he set up the tax-saving Siepmann Foundation in 1973. It controls 75 per cent of Aldi Süd, with Karl’s surviving family, a son and daughter, holding the remainder through other trusts. The foundation structure keeps the firm intact and saves on inheritance tax after Albrecht’s death.

Adapt to survive The Aldi model

Be simple, stay simple Aldi didn’t get where it is with overpriced consultants, but by giving customers reliable quality at competitive prices – without getting distracted along the way. “What you have to achieve,” Karl Albrecht said before his death, “is a customer who thinks he can’t buy cheaper elsewhere.”

Details are important Aldi’s corporate history is filled with frugality legends, like how the brothers redesigned the tyres on delivery trucks so they lasted longer. Whether true or not, the Albrecht brothers were obsessed with costs and efficiencies, no matter how small, reportedly even urging executives to use both sides of paper.

Pay well, on time Though it strikes tough deals, Aldi suppliers in Ireland say the German retailer pays on time and at the price agreed – not months later and at renegotiated prices as other retailers do. The company works its employees hard, but the founding brothers always insisted on paying above average. On his deathbed, according to the Frankfurter Allgemeine Zeitung newspaper, Albrecht urged his family: “Pay our people well, they do a lot.”

Give back Despite Aldi stores’ Lutheran-like frugality, the Albrecht brothers were life-long practising Catholics. Aldi’s holding structure has been criticised by outsiders as a convoluted tax dodge, but those close to the founders say the foundation has made huge donations, in particular to medical research, but with strict non-disclosure clauses.

Original is still best Aldi, the original discounter, is still market leader in Germany, well ahead of arch-rival Lidl’s €16.5 billion. With Albrecht’s death, Lidl founder Dieter Schwarz is now Germany’s richest man with an estimated fortune of €16 billion. Albrecht took a sporting view of the competition, saying: “Without Lidl, we would have fallen asleep.”

Adapt to survive In recent years, particularly in its push into conquer Britain and Ireland, Aldi Süd diluted its strict discount principles and broadened its product range. The inventory has grown from a few hundred to a few thousand products, including fresh fruit, meat, bread and even brand-name products – for decades strictly verboten. Aldi Nord, operating across northern Germany and continental Europe, has gradually followed suit.

Can I see my father’s previous wills? 05:50
Stocktake: Stocks can stay expensive for a long, long time 05:40
Stocktake: Are markets too dependent on Trump’s Maga stocks? 05:40
Revolut valued at $5.5bn after latest fundraising 05:33
Kingspan and Greencore executives sell almost €11m in shares 05:30

1 Bank leaked my loan request to family who tried to rip me off
2 Solar panels: How do they work - and are they worth it?
3 Ryanair and Aer Lingus monitor impact of coronavirus on travel to Italy
4 Boris Johnson's new immigration regime will damage much more than industry
5 Can I see my father’s previous wills?
6 McEvaddy brothers vow to continue to back Irish aviation business
7 UK lays down red line for Brexit trade talks
8 EU and British positions harden ahead of Brexit talks
9 Over $12m from sale of Walford handed over in Sean Dunne bankruptcy case
10 Are high-flying stock markets about to ‘feel the Bern’?
Real news has value SUBSCRIBE