Baskin-Robbins is back to sweeten Irish buyers 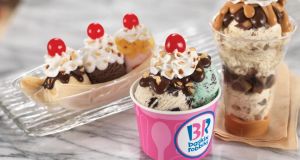 Baskin-Robbins returning to Ireland with plans to open a number of shops across the island as it seeks to grow its market in Europe.

Hold on to your waistlines: Baskin-Robbins is to make a return to Ireland.

The company that brought us 1,200 flavours of ice cream is planning to open a number of shops across the country.

The speciality ice-cream chain, which is owned by Dunkin’ Brands of Dunkin Donuts fame, is set to open stores on both sides of the Border as it seeks to grow its presence in Europe.

Among the areas it has in mind are Dublin, Cork, Galway, Waterford/Wexford and Belfast. Initially, there will be five shops in the Republic, with three in the North.

The Irish shops will join a chain of more than 7,500 Baskin-Robbins outlets in almost 50 countries worldwide. More than 500 shops are located in Europe, with 140 in the UK alone.

The Massachusetts-based company was founded in 1945, and has grown from 31 flavours to more than 1,000. Among its past creations are Beatle Nut, which appeared in Baskin-Robbins stores in 1964 to coincide with Beatlemania hitting the US, and Lunar Cheesecake, which was created in honour of the moon landings in 1969.