Ashford Castle to open over Christmas as upgrade is delayed

Revamp of the 350-acre estate began in January this year 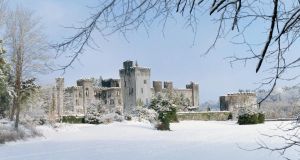 Upgrade of Ashford Castle has included new roofing, windows and electrical systems, and the installation of air conditioning

Ashford Castle in Co Mayo will remain open in the run-up to Christmas and the New Year after its South African owners decided to push back the date for re-starting works on the upgrade of the five-star resort.

Red Carnation Hotels, which acquired Ashford last year, had planned to close all except 25 of the hotel’s rooms for November and December to begin the next phase of refurbishment.

“We’re well ahead in the project,” said general manager Niall Rochford. “So we’ll now just close for January, February and March and we’ll be open for Christmas and the new year.”

Mr Rochford declined to say precisely how much is being spent on upgrading the hotel and its vast estate but he said it is “well in excess”of the reported €20 million purchase price paid by Red Carnation.

The much-needed upgrade of the 350-acre Ashford estate began in January of this year when it closed for 10 weeks for works to “secure the fabric of the building”. This included new roofing, windows and electrical systems, and the installation of air conditioning. It also included a makeover of 27 of its 82 bedrooms. The hotel will close on January 6th and re-open on March 28th.

Room rates this year have increased by 14 to 15 per cent and the hotel will make an “operational profit”, he said. Its occupancy rate was in the “high 80 per cents” while 85 per cent of its customers over the summer period were from the US.