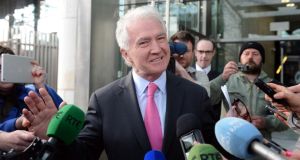 Central to the defence mounted by Seán FitzPatrick (above), Willie McAteer and Pat Whelan was that Anglo Irish Bank had taken legal advice from Matheson Ormsby Prentice to the effect that the Maple 10 transaction was legal. Photograph: Eric Luke

One of the more peculiar aspects of Irish corporate culture is the fetishisation of legal advice – and the advice that emanates from the top four legal firms in particular. Having advice from “Cox’s”, “McCann’s”, “Fry’s”, Goodbody’s” or whoever is the final word on whether something is legal.

This arrangement suits a lot of people, including, of course, the big – and small – corporate law firms. The more value that can be attached to their opinions, the more they can charge for them.

It also suits business in many ways, not least because of the cover it affords to the corporate backside. The last few decades are littered with incidences in which executives who were clearly alive to the potential illegality of something got legal advice to the effect that it was legal and proceeded to do it. Crucially, this tactic was believed to provide protection against criminal prosecution because it made proving you had criminal intent very difficult.

There are of course massive ethical issues inherent in this tactic. If you think something is not okay, getting someone to tell you that it is okay does not actually make it okay. Turning an ethical question into a legal one is just moral shading.

But the real danger is that the lawyers themselves are ultimately hoisted on their own petard. They come under tremendous pressure to give the client the answer it wants, particularly if it is a big client. When you read endorsements from their clients on websites to the effect that they “understand the real world of business ” and give “proactive advice”, you can only assume that means they know what is expected of them.

One suspects the people whose actual job it is to decide whether things are legal or not – the judiciary – have been looking on at this state of affairs over the years with increasing displeasure. Certainly, when they got their chance to put down a marker in this regard during the Anglo trail they took it .

Central to the defence mounted by Seán FitzPatrick, Willie McAteer and Pat Whelan was that the bank had taken legal advice from Matheson Ormsby Prentice – now just known as Matheson – to the effect that the Maple 10 transaction was legal. Company law forbids a company lending money to someone to buy its shares. The only exception is a bank, which can lend money for this purpose as long as it is in the ordinary course of business.

Before the Anglo trial opened, many had predicted Matheson’s advice the deal was legal would be an important part of the case. But, after three days of legal argument, Judge Martin Nolan told the jury the issue of whether legal advice was obtained by Anglo Irish Bank in relation to the Maple transaction was irrelevant to the guilt or innocence of the three accused. Not only that, he did not want any further references to it during the trail.

By that stage, about a dozen witnesses had given evidence about legal advice. Anglo directors, senior bank employees and some of the Maple 10 had told the court they were assured that advice had been sought and obtained on the lawfulness of the transaction. Many of them said they drew comfort from it.

It is far too early to say what the implications of all this are, and one suspects Judge Nolan’s ruling will not be the last word. But, as things stand, the courts have sent a very strong signal to corporate lawyers and their clients that legal advice is just that: advice. It is not an insurance policy against criminal prosecution and is of very limited value – or none at all – if you do something wrong and are caught. This can only foster better corporate behaviour.