Aldi moves into online shopping - but not in Ireland 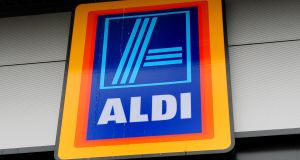 Discount retailer Aldi reported a fall in profits as the supermarket price war took its toll on earnings despite sales surging to a new record level. The firm also said it was moving into online sales in the UK. (Photograph: Rui Vieira/PA Wire)

The British arm of Aldi plans to launch an online operation, marking the group’s first foray into e-commerce in Europe and opening a new front in its battle to raise its share of the tough UK market. However, the German discount supermarket chain said on Monday that it currently has no plans to follow suit in Ireland.

A spokesman for the chain, which currently operates 119 Irish stores, said that it has “no plans to introduce an ecommerce platform in Ireland”, but added that it “ is an area we monitor as part of our customer focused approach”.

Aldi, which also posted a 4 per cent dip in 2014 operating profit, showing discounters are not immune from an industry price war, said on Monday it will begin selling wine by the case online from early next year. That would be followed by non-food special offers, part of a long-term growth and investment strategy in Britain.

“This will enable us to introduce the Aldi brand and some of our best-selling, best-quality and best-value products to thousands more customers,” said chief executive Matthew Barnes.

Aldi has offered online delivery of alcoholic drinks in Australia since 2013 but has not previously entered e-commerce in Europe, seeing it as not profitable enough. Barnes told reporters a launch of Aldi’s core food range online was “not on the radar right now” and it was not inevitable the firm would eventually do it.

Aldi and rival Lidl are the fastest growing grocers in the UK. Almost half of UK households buying groceries visit Aldi or Lidl every month, researcher Nielsen has said. With their low price, limited assortment, low cost strategy they have won share from Tesco, Asda, Sainsbury and Morrison, forcing Britain’s “big four” to cut prices, improve product quality and boost customer service. All four are competing for a share of the fast growing grocery e-commerce market, with Morrison the last to go online when it struck a deal with Ocado in 2013.

Analysts said Aldi’s first move online will cause trepidation among Britain’s big four, already nervous over the possible launch of Amazon Fresh in the UK.

“Aldi adds yet another string to its bow that will be a major worry to the likes of Ocado, Sainsbury’s and Tesco,” said Julie Palmer, partner at consultancy Begbies Traynor.