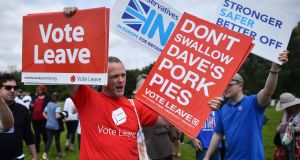 Political risk has been one of the big themes of 2016, with Brexit exercising investors in recent months and the prospect of president Trump in the US likely to do similar in the second half of the year. Attempting to divine the impact of political events on financial markets is a perfectly legitimate activity, but do investors weigh up these matters objectively? Or do our own politics and values shape our investment outlook?

The latter is the case, according to the authors of Political Climate, Optimism, and Investment Decisions, a 2012 study that examined how changes in the US political landscape affected investor behaviour.

Investors become more optimistic when the party they supported was in power, the researchers found, resulting in them perceiving stock markets to be less risky and more undervalued. When the political climate was “aligned with their political identity”, investors increased their allocations to risky assets and showed a “strong preference” for volatile, small-capitalisation and value stocks.

They were also more likely to be more upbeat about the economy and to prefer domestic stocks to international markets.

This inability to sit tight cost them dearly. Investors’ performance was notably poorer when their party was not holding the reins of power.

Opinion polls cited in the study highlight how investors’ investment outlook might be shaped by their political leanings.

In 2000, before the winner of the nail-biting presidential contest between Al Gore and George W Bush had been announced, Democrats were slightly more optimistic than Republicans regarding the economy. Soon after Bush had been declared the victor, however, the optimism gap widened dramatically to about 40 per cent. Among Democrats, 62 per cent were optimistic about the stock market in 2000, compared with 36 per cent in 2001; optimism related to employment fell from 69 to 31 per cent; and optimism related to economic growth fell from 70 to 35 per cent.

The same process was evident in 2009, in the early stages of Barack Obama’s first presidential term. Although the economy was in recession, 85 per cent of Democrats felt the economy would improve over the following 12 months, compared with just half of Republicans.

More experienced and educated investors were less likely to let their political opinions shape their portfolios, although it would be naïve to think they are immune in this regard.

Take Stanford economist and former Bush adviser Michael Boskin, author of an infamous Wall Street Journal op-ed entitled “Obama’s Radicalism is Killing the Dow”. Written at the very height of the global financial crisis, Prof Boskin opined that it was “hard not to see the continued sell-off on Wall Street and the growing fear on Main Street as a product, at least in part, of the realisation that our new president’s policies are designed to radically re-engineer the market-based US economy”.

That piece was published on March 6th, 2009 – the very day markets bottomed, prior to a massive bull market that saw stock prices treble.

Missing the start of bull markets is a costly affair. Within six months of Boskin’s op-ed, the S&P 500 had advanced 65 per cent. But some money managers remained unconvinced. In another Wall Street Journal piece from September 2009, Prospero Capital Management’s Benjamin Bornstein said he was shorting the S&P 500 due to his reservations over the new government’s stimulus package.

“The problem is that governments do not create income or wealth, and current stimulus equates to a future tax liability. That will become a major concern in mid- 2010 when the stimulus is done,” said Bornstein, who added: “I have rarely been so convinced that the next broader market move is down”.

Stocks gained in each of the next six years.

Costly political biases are not, of course, confined to conservatives. Money manager Barry Ritholtz has often recounted how, in 2003, he tried to persuade an acquaintance, a New York hedge fund manager active in Democratic politics, to close his short bets against technology stocks and to consider upping his allocations to equities. Ritholtz’s pleas fell on deaf ears: appalled by the Bush government’s tax cuts, the fund manager stuck to his guns, even as stocks went on to double in price over the next four years.

Political values even influence whether or not one is likely to invest in stock markets, according to a Finnish study, Stock Market Aversion? Political Preferences and Stock Market Participation. Left-leaning voters and politicians are more likely to have an “aversion” to stock markets; controlling for wealth, education and other factors, a moderate left voter is 17 to 20 per cent less likely to own stocks than a moderate right voter.

This is not some peculiarly Finnish phenomenon. In a paper, Nobel economist Robert Shiller refers to a 1954 New York Stock Exchange survey that aimed to understand why four out of five doctors, lawyers, executives, engineers and salesmen did not own any stocks. Thousands of people were surveyed, with Shiller noting that a “vague sense of prejudice against the stock market” was one of the key factors involved.

This “sense of prejudice” is likelier much stronger today than it was in past decades. The 2008-2009 global banking crash has damaged trust and confidence in both the financial sector and in perceptions of experts in general.

In 2002, for example, 80 per cent of Americans believed the free market to be the best economic system, according to polling firm Globescan; by 2010, that number had fallen to 59 per cent. A similarly large decline in support was evident in Britain and in other countries tracked by Globescan. Global support has increased in recent years, although it remains nowhere near levels recorded in 2002.

Some countries, of course, are more hostile than others – French people have consistently been the most sceptical, with only a third or so of people voicing support for the free-market system in most Globescan polls.

National differences aside, the research would suggest the international growth in attitudinal distaste for the financial sector has reduced people’s inclination to invest in stock markets. The timing is unfortunate; global markets have rebounded strongly since the events of 2008-2009, but changes in societal values mean all too many people are likely to have missed out on the gains.

Studies show social and political values affect people’s investment portfolios in various other ways. According to behavioural finance expert Werner De Bondt, surveys of affluent European investors show that people who see themselves as self- disciplined and who believe governments ought to reduce their debt load are more likely to prefer cash- rich, low-risk portfolios.

Patriotic investors are also prone to behavioural biases. One study covering 53 countries found that investors in the most patriotic countries were more likely to be guilty of home bias – that is, overweighting their own equity market and paying scant attention to international markets. A one standard deviation drop in patriotism, the study found, resulted in an extra $18-$30 billion being invested abroad.

The dangers of “patriotism in your portfolio” should be all too obvious to Irish investors, most of whom will surely shudder when they hear the words “green jersey”.

The solution is not to shed one’s political values, but to be conscious of the dangers of letting them influence one’s investment outlook. Quite simply, ideology and investing are a lousy mix.

1 AIB escapes regulator action
2 How much will a Covid-19 vaccine cost?
3 Goldman Sachs in talks to take over Blanchardstown shopping centre
4 How long can Government afford to keep State pension age at 66?
5 Bord Pleanála clears way for 21-storey tower on former Apollo House site
6 Wake-up Call: Why unethical high performers are not shunned by peers
7 Unemployment rate remains at near record 26.1% in May
8 Importance of making a good first impression at interviews
9 In praise of Gogglebox Ireland, an essential service in all but name
10 Irish whiskey sales near milestone of 12m cases a year
Real news has value SUBSCRIBE
Save money on international transfers