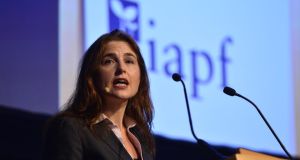 Irish workers cannot be sure of receiving a State pension in retirement in future generations, according to a report published this morning.

The cost of existing hidden state pension liabilities are estimated by the Pensions Authority to be €440 billion – more than double the €203 billion national debt estimate for the end of this year, a figure that already amounts to 111 per cent of GDP and requires significant reduction under European budgetary rules.

That raises doubts about the sustainability of the State pension promise, the Irish Association of Pension Funds annual benefit conference will hear today.

A study of 25 state pension systems by the Australian Centre for Financial Studies and Mercer finds that Ireland’s State pension is among the best in the world in terms of adequacy. However, Ireland’s overall score is dragged down by doubts over its sustainability, where it is ranked just 20th of 25 countries.

It is the first time that Ireland has been included in the study.

Overall, Ireland is ranked 11th of the countries surveyed in the Melbourne Mercer Global Pension Index (MMGPI) with a “score” of 62.2.

This compares to the 82.4 awarded to Denmark, which is seen as having a well-funded system, giving good coverage, a high level of assets and contributions, adequate benefits and a parallel private pension system with developed regulation.

Australia and the Netherlands are seen as having the next best state pension provision.

Ireland scores well above Denmark on adequacy - second best overall behind Australia – but dramatically poorer for sustainability, a measure that assesses the likelihood that the system will be able to provide promised benefits into the future. It ranks 15th in terms of system integrity.

Ireland is seen as on a par with Germany’s state pension system and ahead of the United States, but behind Britain.

“The Melbourne Mercer findings highlight that future generations cannot be sure of receiving a State pension [in Ireland] in line with current levels,” said Peter Burke, DC consultant at mercer who presented the findings.

“Now is the time to reform the pension system so as to reduce the risk of future pensioners facing poverty,” he said, urging the introduction of an auto-enrolment system for current workers.

Alongside suggestions that Ireland might increase occupational pension scheme coverage and introduce a minimum level of private sector pension saving, the Melbourne Mercer study says working age adults in Ireland should enjoy greater protection for their pension savings in the event of company insolvency. It also proposes that companies should be restricted more tightly in the level of in-house assets held by occupational pension schemes.

The index attributed a 40 per cent weighting to adequacy, 35 per cent to sustainability and 25 per cent to issues around integrity.

1 Coronavirus: Irish holding back on holiday plans
2 Bank leaked my loan request to family who tried to rip me off
3 Can I see my father’s previous wills?
4 Eason acquires rival Dubray Books for undisclosed sum
5 Ryanair and Aer Lingus monitor impact of coronavirus on travel to Italy
6 Solar panels: Are they worth the investment?
7 Accumulated profits at David McWilliams’ media company hits €675,000
8 Fuel company loses €1.35m challenge over tax bill in ‘green diesel’ case
9 Siblings who became ill next to wind farm settle case
10 How can I view my dead brother’s will if I’m not the executor?
Real news has value SUBSCRIBE
Save money on international transfers