Stocktake: March was the ‘craziest’ month in market history 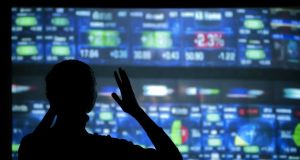 The S&P 500 fell 4.4 per cent last Wednesday, its worst start to a quarter. You may not have noticed: huge one-day price moves have, as S&P Dow Jones Indices’ Hamish Preston notes, become the “new normal”.

With stocks moving an average of 5.3 per cent each day in March, the cumulative percentage change was 117 per cent – much bigger than that seen in the worst months in 1929 and 2008. March was like eight average months stuffed into one, says Maggiulli. We might, says Maggiulli’s colleague Michael Batnick, never again experience anything like it.

1 Companies without tax clearance shut out of Covid wage subsidy
2 Moving in and out of lockdown is a recipe for economic disaster
3 Avoca warns of redundancies due to coronavirus
4 Coronavirus spreads to sandwich king
5 Non-executive directors face new paradigm in the boardroom
6 Ufurnish: ‘It’s like Skyscanner, but for furniture’
7 Errant texts highlight weaknesses in banks’ digital shift
8 The Irish Times Deal of the Year: The three finalists
9 The Irish Times Company of the Year: the three finalists
10 Virgin Media vows to withhold sports channels until Eir ‘pays its bill’
Real news has value SUBSCRIBE
Save money on international transfers