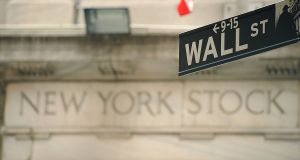 Wall Street, New York. It took only 20 trading days in the current descent for the Dow Jones to fall from all-time highs into a bear market. Photograph: Stan Honda/AFP/Getty Images

It’s hard to keep up with today’s markets.

“We believe the S&P 500 bull market will soon end2,” Goldman Sachs said last Wednesday, predicting the S&P 500 would fall to 2,450 by mid-year. It nearly hit that level the following day. The sheer speed of the current descent would spook the hardiest of investors. It took only 20 trading days for the Dow Jones to fall from all-time highs into a bear market, notes Ritholtz Wealth Management’s Michael Batnick, making it the fastest bear market in history.

European declines have been even more precipitous; last Thursday’s 11 per cent plunge in the Euro Stoxx 600 marked its biggest one-day collapse in history. For what it’s worth, Goldman reckons the current apocalyptic mood won’t persist, predicting the S&P 500 will rebound 30 per cent or so to 3,200 by the end of 2020. However, the notion of a V-shaped recovery is rubbished by Allianz’s Mohamed El-Erian. “Hell, no,” says El-Erian, who adds that any recovery is likely to be U-shaped “if not an L or even I”.

Still, while El-Erian expects lasting economic damage, financial markets will react much faster than the economy. “When the green light flashes, and it will flash at some point,” he says, “we are going to have such a snap back.”