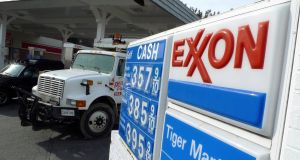 Oil giant Exxon Mobil has been having a tough time of it lately. Shares recently fell in 18 out of 19 trading days – the worst losing streak in the past 40 years, according to SentimenTrader.

Exxon, the biggest company in the world as recently as 2013, is now valued at $150 billion, down more than 70 per cent from its peak. The company’s market capitalisation has halved in 2020 alone so Exxon, long one of the energy sector’s most consistent dividend payers, now sports a record dividend yield of 10 per cent.

A yield that high will tempt some, especially investors who like to buy when there is blood in the streets. However, options market pricing confirms that markets expect Exxon’s dividend will be slashed.

As for the advice about buying low, that holds true for indices but be careful when it comes to individual stocks. Ritholtz Wealth Management’s Ben Carlson notes that General Electric (GE) was the world’s biggest company for most of the mid-1990s through to the mid-2000s, prior to Exxon overtaking it in 2005. Investors who attempted to catch GE’s falling knife were badly bloodied, with the stock losing more than 90 per cent of its value.

Fallen giants Citigroup, Bank of America and AIG were all in the top 10 most valuable companies in 2005. Such descents are not uncommon: since 1980, says Carlson, an average of five of the names in the top 10 have dropped out of that bracket five years later.

Many of the biggest market winners eventually become the biggest losers, says Carlson. “Some stocks don’t come back.”

1 ‘I don’t need to do any of this. . .I don’t actually need to work.’
2 Basic income for all: Has the Covid crisis given us a new economic model?
3 Only way is up for Stripe as valuation skyrockets
4 How long can Government afford to keep State pension age at 66?
5 Promontoria barred from pursuing doctor over Ulster Bank loan
6 When the levees break: consumers pay nine levies
7 Anti-alcohol zeal of public health experts peppers reopening debate
8 AIB revives €1bn-plus problem mortgages sale
9 State may face €1bn in compensation in Covid-19 case, Press Up claims
10 Ryanair warns it may reduce more Irish services and relocate operations
Real news has value SUBSCRIBE
Save money on international transfers