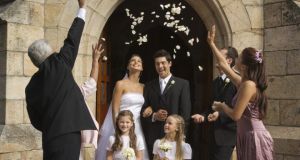 Weddings can be so expensive and if a father (as is the tradition) pays for his daughter’s wedding, is this seen as a gift and has it revenue implications, particularly if he hands over the money for her to manage as the arrangements unfold?


You’re quite right that weddings remain a particularly heavy financial burden, especially in this country.

Austerity has seen some of the wilder excesses of the bubble years toned down – which is very much for the better. For a while there, so much focus was on the “event” that the occasion was getting lost: it seemed as if every person in a given circle had to go one better than the previous couple in their approach to the big day.

Good news, too, is that the tradition to which you refer – where the father of the bride bears the full cost of the day – is also rapidly disappearing into the history books, and has been for some time.

Still, families will normally bear part of the burden and it would be a bit of a downer if you found that revenue was going to jump in and take a slice.

There is nothing specific in Revenue manuals, at least as far as I can find, detailing its approach to wedding expenses. All I can tell you is that I have never heard a whisper of the Revenue pursuing either a parent or the couple themselves in relation to gift tax arising from wedding expenses.

If it had happened, I find it difficult to believe it would not have made it to the front pages somewhere at the time. I would be amazed if Revenue did actually adopt such a course – although I suppose if they felt the money was of such a scale as to effectively be a deliberate effort to bypass the succession taxes, it might feel obliged to intervene.

Can you enlighten me as to the current state of my Irish Life shareholding? I’ve not received any communication for some considerable time now and last understood that the company had yet to be disposed of by the Government. Is that still the case?

Can a capital loss be claimed only subsequent to its eventual disposal?


The company has been disposed of – over a year ago. The State initially bought Irish Life from the listed Irish Life & Permanent in June 2012 for about €1.3 billion after a previous effort to sell the profitable business foundered.

However, in February 2013, Canadian group Great West LifeCo acquired the Irish assurer for €1.3 billion, adding it to the Canada Life business that it already operates in the State.

Of course, the sale of Irish Life to the State was part of the recapitalisation of the bank which was effectively nationalised by the Government in 2011.

As I understand it, your shares should be in a company called Irish Life & Permanent Group Holdings plc. Although the company’s name was changed in May 2012 to Permanent TSB Group Holdings, the old share certificates and holdings remain valid and that latter company continues to trade on the junior ESM market in Dublin.

As of the end of last week, the shares were trading at 12.7 cent each.

As they are still trading, I understand that a capital loss would only be triggered by your eventual share of your holding, or part of it.

If your shares date back to the original Irish Life, you need to get in touch with Capita, Permanent TSB’s share registrar, which will organise to have a new updated share certificate issued to you.

Irish Life shares certificates ceased to be valid following the 1999 merger with Irish Permanent in which every Irish life share was exchanged for 0.6085 of a share in Irish Life & Permanent.


Why is full PRSI taken from my
pension?

Why is full PRSI deducted from pensions (or at least from mine). The Citizens’ Information Board on line advice is that it is not deductible.


I’m wary of saying never, having being forced to clarify all too often on foot of such absolutist advice. However, to the best of my knowledge, PRSI is not payable on pensions – at all.

The website of the Department of Social and Family Affairs, which manages PRSI, says it is payable below pensionable age, which is currently 66 years – though that will be rising to 68 over the coming years.

I wonder if you are mixing up PRSI with the universal social charge.

This is charged on occupational pension income though not on social welfare pensions.

For people over the age of 70 with income of €60,000 a year or less, a reduced rate applies. It doesn’t change the 2 per cent rate, or income band, but all income over that level is taxed at just 4 per cent.

If you are paying PRSI, I think you should challenge it urgently.

Please send your queries to Dominic Coyle, Q&A, The Irish Times, 24-28 Tara St reet, D ublin 2, or e mail dcoyle@irishtimes.ie. This column is a reader service and is not intended to replace professional advice.