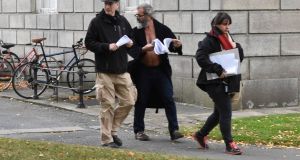 Mel Gibson on the set of his latest movie, The Professor and the Madman, which he is shooting in Dublin city and Ardmore with Sean Penn

The studio behind the Penny Dreadful series and the Tudors is being put on the market.

Bray-based Ardmore Studios has been one of Ireland’s most successful studios for film and television productions but has only recently overcome debts that threatened to cripple the business in 2012.

The 18-acre site is being sold as a going concern.

Ardmore is currently hosting Hollywood stars Mel Gibson and Sean Penn, who are filming sequences for the story of the making of the Oxford English Dictionary – The Professor and the Madman – and is also involved in the second series of the television drama Into the Badlands.

In a statement, the company said it had a “healthy number of potential productions in the pipeline for the coming months and year ahead”, adding that the sale would have no impact on the day-to-day operations of the studios.

The owners also said the time was right for the sale. Mr McGuinness and Mr Kilkenny, who was at one time accountant to U2 among other bands, have been involved in several companies together down the years. But Ardmore is believed to be the only business in which they share an interest as the two men have been at odds in recent years.

Ardmore has seen significant demand over recent years, operating at between 85 and 90 per cent of capacity and delivering strong profitability in the past two years.

The company says Ireland’s “favourable” section 481 tax incentive scheme for film production has been “a key attractor for international productions” and that demand for fully-serviced studio space in Ireland remains buoyant.

The value of the company’s site and facilities together with its recent successes and the current strong demand for facilities means Ardmore could attract bids upwards of €15 million, depending on the number of parties competing to purchase the studios.

The sale comes just weeks after Britain’s Pinewood Studios were sold for £323.3 million to a company run by a property fund.

It has invested more than €2 million since 2012 to enhance and upgrade its facilities on the back of that demand. It has also expanded its footprint this year, opening the 47,000sq ft Film Factory nearby to provide additional studio space.

Reporting 2015 profits of €1.35 million earlier this year, chief executive Siún Ní Raghallaigh said Ardmore had benefited from growing demand for fully serviced sound studios in Ireland. “We are seeing evidence of a good pipeline of demand for high-end studio space which signals continued strong performance for the coming years,” she said.

In addition to Ardmore, Ms Ní Raghallaigh, who took over as CEO in July 2012 and is also chairwoman of TG4, is a founding director, with Mr Kilkenny and producer John Kelleher of Troy Studios, which is located in Dell’s former Limerick facility. Troy is, however, an entirely separate business and not part of the Ardmore sale.

Productions filmed on site include Braveheart, My Left Foot, Excalibur, Moone Boy, The Tudors and Penny Dreadful. The studios output has been recognised with 14 Oscars down the years as well as Bafta, Golden Globe and Emmy awards.

Though selling Ardmore, it is understood that both Mr McGuinness and Mr Kilkenny will continue to be involved in the film business. Mr McGuinness is currently producing a television series for Sky television while Mr Kilkenny is reported to have a variety of film-related enterprises.

IBI Corporate Finance is acting for Ardmore in the sale.

1 Should my mam wait for house prices to drop before buying?
2 Citigroup warns that markets are out of step with reality
3 Chris Johns: Past is another country when it comes to our post-pandemic future
4 ‘The recovery needs to be a full-scale economic renewal’
5 US ‘hard seltzer’ drink White Claw launches in Ireland
6 Michael Smurfit: ‘I asked Trump to invite me to the White House for my 80th birthday’
7 ‘I’m so lucky to be in the Caribbean – a million miles from Derry Girls’
8 Donohoe told insurers they risked ‘irreparable damage’ to reputation
9 Joint accounts: if one of us dies, can the other access the money?
10 Kerry mussel producer loses Strasbourg court challenge
Real news has value SUBSCRIBE
Save money on international transfers