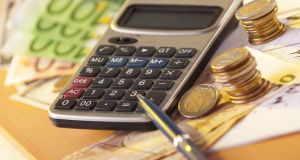 Almost 60,000 fewer workers will pay tax at the higher rate in 2021, according to new estimates from the Revenue Commissioners. There will also be an 11 per cent decline in the numbers subject to the top rate of USC,while more workers will find themselves out of the tax net altogether.

Given that the Government made no changes to income taxes in October’s budget, the decline in higher rate taxpayers is down to falling incomes.

The figures also show a similar decline in those paying the top rate of universal social charge (USC); this year, about 262,000 taxpayers would have paid USC at a rate of 8 per cent, indicating that they earned €70,045 or more. Next year, that number is expected to fall to 233,200, a fall of 11 per cent.

The figures also show a jump in those who will find themselves out of the tax net altogether, and exempt from tax in 2021.

In 2021 however, the numbers not subject to income tax will increase by 4.4 per cent, while those exempt from both this and USC will also increase by 4.2 per cent to 805,600.

So far, income tax receipts have proved remarkably resilient to the havoc wrought on the economy by coronavirus, and are expected to finish the year just below 2019.

However, receipts might slip in 2021, given that fewer taxpayers will be paying tax at the higher rates.

But the Revenue figures show that the decline in incomes is not as bad as was initially expected.

Ahead of October’s budget, Revenue published a document indicating that it expected some 473,800 taxpayers to be paying tax at the higher rate in 2021. This would have represented a 21 per cent decline on forecasts made in 2019, and would have meant that the proportion of higher rate tax payers, out of all taxpayers, would have shrunk back to just 18 per cent.

Now, Revenue expects about 20 per cent of all taxpayers will be paying tax at a rate of 40 per cent next year.

Similarly, Revenue has increased its expectations for higher earners. Before the budget, it expected about 14,707 workers would be earning in excess of €275,000 in 2021. Now it says that almost 17,000 people will.