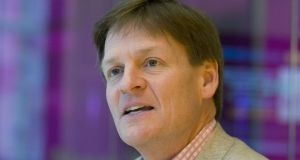 Average investors are being victimised by the fact that it’s legal for some people - high frequency traders - to get advance news on prices and what investors are doing, Michael Lewis claims in his new book “Flash Boys”. Photograph: Jonathan Fickies/Bloomberg

The US stock market is a rigged game where high-frequency traders with advanced computers make tens of billions of dollars by jumping in front of investors, according to author Michael Lewis, who spent the past year researching the topic for his new book “Flash Boys”, which is published tomorrow.

Lewis rose to fame in the 1980s through his tale of life on Wall Street, “Liar’s Poker”, and more recently penned a much-publicised piece on Ireland’s economic troubles for Vanity Fair.

According to Lewis, while speed traders’ strategies, developed over the past decade with help from exchanges, are legal, “it’s just nuts” that they’re allowed, he said, adding that the tactics are too complicated for individual investors to understand.

“The United States stock market, the most iconic market in global capitalism, is rigged,” Lewis, whose books “Liar’s Poker” and “The Big Short” highlighted Wall Street excesses, said during an interview with CBS.

“It’s crazy that it’s legal for some people to get advance news on prices and what investors are doing.”

Everyone who owns equities is victimised by the practices, in which the fastest traders figure out which stocks investors plan to buy, purchase them first and then sell them back at a higher price, said Lewis.

To show how lucrative the tactics are, Lewis said a technology firm spent $300 million to build a line that would shave three milliseconds off the time it takes to communicate between New Jersey and Chicago, then leased it out to securities companies for $10 million each.

The author’s comments follow New York Attorney General Eric Schneiderman’s decision to investigate privileges marketed to professional traders that allow them to place their computers within feet of exchanges and buy access to faster data streams. Officials at the US Securities and Exchange Commission and Commodity Futures Trading Commission have also said market rules may need to be examined.

Lewis is adding his voice to a debate that has obsessed the securities industry for almost a decade while only periodically surfacing in public via events such as the May 2010 flash crash, in which the Dow Jones Industrial Average posted an almost 1,000 point loss.

Previous books by the one-time Salomon Brothers trader have focused attention on everything from mortgage derivatives to baseball statistics and contributed to the outcry over the events leading to the 2008 financial crisis. His latest target, high-frequency trading, comprises a diverse set of software-driven strategies that have spread from US equity markets to most developed countries as computer power grew and regulators tried to break the grip of centralised exchanges. While the tactics vary, they usually employ super- fast computers to post and cancel orders at rates measured in thousandths or even millionths of a second to capture price discrepancies on more than 50 public and private venues that make up the American equities market. Dominating Volume

High-frequency traders account for about half of share volume in the U.S., a statistic that shows their pervasiveness and hints at the obstacles faced by proposals to rein them in. Exchanges rely on HFTs for profits as well as liquidity, with electronic market makers all but eliminating the old system of human floor traders who oversaw the buying and selling of equities. While critics such as Lewis see a Wall Street plot, proponents say the new system is faster and cheaper.

1 Revised help-to-buy scheme for first-time buyers open for applications
2 ‘No demand... because there are no people’ at well-known Dublin pub
3 Divorce: What will it cost and can you afford it?
4 Management of Irish PR group Drury acquire agency from Omnicom
5 Post-Covid television starts to shape up – but with missing pieces
6 Nearly 30,000 could lose pandemic payment if they do not confirm eligibility
7 CityJet to exit examinership after High Court ruling
8 Transferring the family farm without a tax headache
9 Apple received $250bn dividend from Irish subsidiary in 2019
10 Tech giants back legal challenge to Trump’s foreign worker restrictions
Real news has value SUBSCRIBE
Save money on international transfers