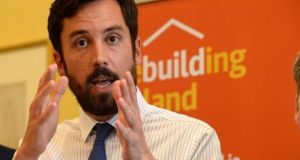 Rebuilding Ireland Home Loan: Minister for Housing Eoghan Murphy is seeking an additional €200 million per year for each of the next three years for the scheme

I have applied recently for a Rebuilding Ireland Home Loan. Have they made any more progress with the money being granted?

As usual when politicians get involved, you need to pay close attention to exactly what is being said. The Rebuilding Ireland Home Loan scheme is certainly up and running and loans are being disbursed. The question is how many.

There was concern earlier this year that some local authorities at least were telling people who had already been approved for loans that there were no resources available to allow them to draw down the money.

Minister for Housing Eoghan Murphy quickly came out to clarify in the Dáil that there should be no delay in loan drawdown as there was “more than enough funding” to honour approvals already granted.

Now that was back in April and, as you will note, he was talking only about loans that had been approved at that time. Most of those will have been subject of applications back in 2018.

There is clearly a squeeze on the funds available. The Government originally allocated €200 million over the projected three years of this initiative. But, in the event, the final allocation to local authorities for 2018 alone turned out to be just shy of €210 million – more than the entire three-year budget for the programme.

Figures released to the end of February 2019 show that more than 4,150 applications had been received and assessed by the Housing Agency. Of these, 1,772 were recommended for approval and 575 loans had been issued. I gather this number has since risen to more than 700.

The Minister has flagged a big announcement on the issue this week. The most recent information was that he was now seeking an additional €200 million per year for each of the next three years. We shall have to wait and see but all the indications are that the scheme will get additional funding and is expected to continue assessing and disbursing loans.

For someone like you, who only applied recently, no decision is likely until the local authorities are aware of just what resources they will have under the scheme.

Quite why strong demand for the scheme should have been a surprise is, in itself, a surprise. The same happened with Help-to-Buy. Government – and not just the current administration – seems to be constantly taken aback at the appetite for property purchase incentives. You really would think they had evolved to a more pragmatic assessment at this stage.