Ireland’s ‘generation X’ are struggling more than their parents 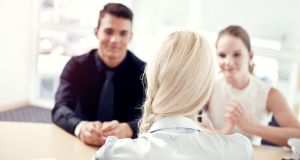 Those aged 18-34 are more upbeat than their older counterparts, according to the survey. Photograph: Istock

They bought properties at the height of the boom which plunged many into negative equity, experienced consecutive pay cuts and austerity measures, and are faced with the double whammy of paying off hefty mortgages while also shouldering the significant cost of childcare bills.

Now a new family finance report from Aviva, unsurprisingly perhaps, finds that Irish consumers aged 35 -54 are more likely to be struggling than any other cohort across Ireland, with the “squeeze” most keenly felt by those aged be 35-44.

One in three are struggling to make financial ends meet, while two in three of those in the age group do not expect their income prospects to improve.

“This key group is experiencing a financial ‘mid-life crisis’ as they juggle their responsibilities and liabilities to keep their heads above water. Two in three of them see no immediate prospect of their income improving and many of them will have to find a way of funding their retirement. Their plight deserves the attention of those working on future pension policy,” said Ann O’Keeffe, head of individual pensions and investments with Aviva.

Those in this age group are also more downbeat about their job prospects compared to their younger work colleagues. Less than one in four say the recovery has benefitted them personally, while a similar number expect their finances to improve in the near term.

More than half say they are not at all prepared for retirement. Yet, a similar proportion expects, while close to one in 10 believe they will carry significant debt into retirement.

They also emerge as the most indebted with over three quarters saying they have debts other than their mortgage. The average outstanding debt is €5,500.

By contrast, thanks to final salary pensions and the enormous growth in house prices over the past few decades, the current generation of pensioners emerge as the most financially well off group in Aviva’s research with 44 per cent of them – the highest of any age cohort – living comfortably, and 21 per cent “struggling”.

While they may be struggling with record high rents, those aged 18-34 are more upbeat than their older counterparts. Just more than a quarter (26 per cent) say they are struggling, with another 26 per cent comfortable. Moreover, this age group is the most optimistic, with some 44 per cent expecting their income and employment prospects to improve.