In a nutshell: what is the USC?

Unpopular tax was introduced at the height of the economic meltdown 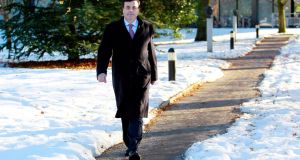 The Universal Social Charge (USC) was introduced at the height of the financial crisis in December 2010 by the late Brian Lenihan of Fianna Fáil to help shore up a huge hole in the public finances and to amalgamate the income levy and the health levy. USC is paid in addition to income tax and PRSI and now represents revenue of €4 billion per annum for the State.

When it was first introduced, it applied to all income over €4,004 but that threshold was increased in later Budgets and in 2016 is €13,000. Anybody earning this amount or less does not pay any USC. Those earning more than this amount pay USC, with these rates:

8 per cent on the balance