How dangerous are the ‘Fang’ stocks propping up the market? 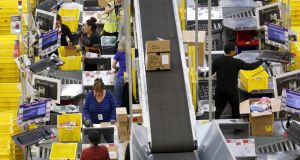 Workers at an Amazon warehouse: the company, one of the so-called four ‘fang stocks’, is a major reason why the S&P 500 was in the black in 2015. Photograph: REUTERS/Fred Greaves

The S&P 500 is in danger of recording its first calendar year loss since 2008, with a handful of high-flying technology stocks keeping the index afloat. Is the ageing bull market, now almost seven years old, running out of steam?

It’s certainly looked tired in 2015, barely eking out a 1 per cent gain. It would have been much worse were it not for the so-called Fang stocks: Facebook, Amazon, Netflix and Google. Netflix has soared by more than 150 per cent this year; Amazon, now a $300 billion behemoth, has more than doubled; Google (or Alphabet, to use the official name), having gained 40 per cent this year, is now worth more than $500 billion and is the second-most valuable company in the world; Facebook is up more than 30 per cent.

Were it not for these four stocks, the S&P 500 would be in the red in 2015. So too would the Nasdaq: it has gained 10 per cent this year, but the tech-heavy index would be staring at a 5 per cent decline without the Fang stocks.

Jonathan Krinsky, a technical analyst at MKM Partners, noted recently the median stock has declined by 12 per cent from its 52-week high, despite the fact the S&P 500 is within touching distance of May’s all-time high. Almost a third of stocks are in individual bear markets, having fallen by 20 per cent or more, while barely half of stocks are above their 200-day moving average. According to Krinsky, there have been only three occasions when a similar number of stocks were trading above their long-term averages at the same time that the S&P 500 was within 2 per cent of a 52-week high: in 1998-2000, in October 2007, and July-August of this year. “In other words”, says Krinsky, “the turkey looks good on the surface, but where’s the stuffing?”

Although momentum is a powerful force, it’s safe to assume the law of large numbers will limit future growth at Google, Amazon and Facebook, which are cumulatively valued at $1.1 trillion.

To doubters, the current faith in the Fang stocks, even as the broader stock market stagnates, is the type of thing you see near market tops.

In the late 1990s, enthusiasts liked to talk of the “four horsemen of technology”: Cisco, Dell, Intel and Microsoft. The huge gains in these large-cap stocks helped drive indices higher, but this masked weakness in the broader market. Once the tech giants topped out, indices crumbled.

Going back further, the so-called “nifty fifty” were the source of much excitement in the late 1960s and early 1970s. As analysts at Jefferies noted last week, there have been “numerous periods in stock market history when bundles of stocks trend away from the bulk of the index”.

“We are at the later stages of the equity bull market,” says Credit Suisse, which sees “increasing headwinds for equities related to valuations, an uncertain macro environment, bottom-up disruptions, weak earnings momentum, and falling market breadth”. JPMorgan, too, is cautious: “The long period of indiscriminately buying any dip might be coming to an end”, with equities “unlikely to perform particularly well” in the coming 12-18 months.

History also suggests future returns may be muted. Earlier this year, Michael Batnick of Ritholtz Asset Management noted there were 54 prior periods where six-year returns exceeded 200 per cent. On average, stocks gained just 9 per cent in the following three years, nowhere near the average three-year return of 38 per cent.

According to a recent research note from Bank of America Merrill Lynch quantitative strategist Savita Subramanian, equities tend to spike higher in the years preceding market peaks. The minimum return achieved in the final two years of a bull market has been 30 per cent, she says, while the median return has been 45 per cent.

Bulls might also argue that while the aforementioned market breadth statistics are concerning, the current situation is different in one key respect from past market peaks. At the major market tops in 2000 and 2007, for example, indices were roaring higher due to the massive outperformance of a small number of large-cap stocks. The fact a large number of stocks had already begun to decline was a warning signal that market technicals were less healthy than they appeared.

In contrast, markets have been flat over the past year. It may well be the bull market is pausing rather than ending. Morgan Stanley, for example, views the current market as a “midexpansion period where equity returns are not strong (much like 2015 so far), instead of the end of the expansion”.

As for the Fang stocks, it may be overstating things to say indices are dependent on their movements. Another group of stocks may assume a leadership role. Alternatively, money might migrate out of the Fang stocks and into more reasonably priced equities, as suggested by Jefferies analysts, who say investors should “expand the number of stocks in the portfolio rather than narrowing them”.

The problem with attempting to time the market, however, is that investors may end up exiting too early, and miss out on the big returns characteristic of late-stage bull markets.

“As we move further into this bull market, the dilemma many investors face is whether or not to maintain equity exposure,” says Subramanian.

The “robust returns” seen during the later stages of past bull markets “make the opportunity cost of selling too early potentially quite painful”.

1 The wealth of the Irish – how do your assets match up?
2 KBC Ireland fined €18.3m for ‘unconscionable’ tracker scandal role
3 Will Facebook walk away from European market after data protection 'hissy fit'?
4 Irish company to test vaccines on volunteers deliberately infected with Covid-19
5 Dunnes Stores set to enter grocery delivery market
6 Air travel never going ‘back to way it was’
7 Dublin and Cork airports look at setting up pre-flight Covid testing centres
8 State calls for applications to €500m disruptive technologies fund
9 Eir takes on extra staff as ComReg chases it on complaints
10 How to upgrade your home entertainment system for less
Real news has value SUBSCRIBE
Save money on international transfers