Why won’t the State offer cheap loans to homebuyers?

Government borrowing has never been cheaper, yet the State is hitting low income earners hard 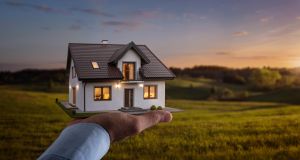 At a time when interest rates are going only one way – down – why is the Government penalising those homebuyers it claims to be assisting?

It was touted as an affordable home loan scheme, a way for those on low incomes to not just get access to finance to buy a home, but to do so in a way that would allow them to borrow more by being charged less for the money.

However, just two-and-a-half years later, the Rebuilding Ireland Home Loans (RIHL) scheme has become even less affordable than loans offered by the major banks, and potential homebuyers are giving up on it. It’s almost as if the Government doesn’t want people applying for it. But where has it gone wrong and what should the State be doing?

You can make a home affordable in two ways: build homes that can be sold at lower prices than market rates, or offer cut-price loans so that monthly repayments are less, which allows buyers to borrow more.

It is the latter that the RIHL tried to do when it was launched in 2018 with a fund of €200 million. Initially over-subscribed, councils soon complained that such was the level of interest, they were running out of money, and it was later bumped up to in excess of €500 million.

The level of demand for the scheme came as of little surprise. With 25-year fixed rate loans on offer at 2 per cent – at a time when market rates were north of 3 per cent – the scheme made home buying significantly more affordable for those on incomes of less than €75,000 for a couple, or €50,000 for a single person.

Yes, the scheme had challenges – such as the compulsory expensive mortgage protection policy – but overall it offered low income buyers a real chance of qualifying for a decent mortgage.

Rather than base affordability on Central Bank income multiples, it was based on disposable income, which allowed people to borrow more. And given that monthly repayments were going to be lower thanks to lower interest rates, it made house buying more affordable.

And it’s already having a deleterious impact on the scheme.

Straight away it makes an “affordable” scheme proportionately less so. For example, the aforementioned borrower on €40,000 can now only borrow €167,786, because the cost of servicing their mortgage has increased. It also makes it considerably more expensive than mainstream lenders. The arrival of Avant means that homebuyers can now borrow at less than 2 per cent over seven years.

Unsurprisingly, homebuyers have begun giving the scheme a cold shoulder, with approvals down by 60 per cent in the first six months of 2020. In the pre-pandemic first quarter, the decline was still significant at 37 per cent.

The Government said that because the scheme was targeted at “higher risk borrowers” loans had to be priced accordingly. But the scheme was originally designed for low income buyers – not those with bad credit – with borrowers having to undergo a normal underwriting process.

Outstanding credit card loans, for example, immediately decrease how much someone can borrow.

And this approach has been borne out in how the – admittedly still new – scheme has worked to date. As of June 2019, the default rate for such loans was 0.4 per cent – the same as Central Bank figures for mainstream loans.

It’s not just the Government that thinks a higher rate is justified. In a report published last month the ESRI argued that as a lender of last resort, because applicants have to prove they’ve been turned down by two other lenders to apply, the interest rate on the loan should in fact be higher than the natural long-term competitive market rate.

“Otherwise, buyers have an incentive to apply for this loan, rather than secure finance from the market,” the ESRI said. But isn’t that why the income caps were originally imposed on the scheme? It’s hard, after all, to imagine that someone earning €35,000 in Dublin is cherry-picking the home loan scheme over an offer from a bank, which would lend significantly less to them.

Nonetheless, the ESRI advised the Government to price the scheme even higher. Above, in fact, the market rates for a 10-year fixed rate loan, which start at about 3.15 per cent rate for Ulster Bank's 10-year rate.

While it hasn’t gone quite this far, the latest increase has significantly diminished the attractiveness of the scheme, particularly to potential homebuyers in Dublin. While low income earners can still access finance on the scheme, they will now have to pay a premium for the money.

The increase in the cost of funds is ironic when considered against overall Government rhetoric. Not only is the latest iteration of the scheme a step away from its “affordable” origins, it is also out of line with criticism of lending rates in Ireland.

In 2018, our current Minister for Public Expenditure and Reform Michael McGrath (then in opposition) called for consumers to “kick-start a war on mortgage rates”.

At a time when interest rates are going only one way – down – why is the Government penalising those homebuyers it claims to be assisting?

Surely there must be an argument for the Government to go in the other direction. Borrowing has never been so cheap – last month, the State sold some €1.5 billion in Government bonds at negative rates.

While it doesn’t begin to solve the problem of boosting supply of housing, lower rates are a clear path to improving affordability for those on low incomes.

Time then, for the Government to start its own internal war on rates.