Homeowners face up to 125% increase in property taxes

As a new valuation date looms, property prices are on the rise

Property tax could be set for a significant increase for many households in 2019, as property prices in some areas have risen dramatically since the tax was set in 2012. Conor Pope reports. 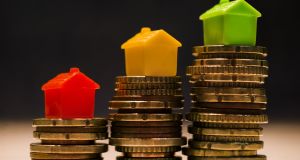 As property prices have not risen at the same rate across the country, it means that some homeowners may be burdened with a far greater rise in the tax than others. Photograph: iStock

Now, however, property prices in some parts of the State have as much as doubled and a new valuation date is looming. So can the Government realistically expect to apply such an increase to your tax bill when the next revaluation is due in 2019?

Whether such a move would be politically palatable – or whether it might raise the ire of voters à la the water charges – remains to be seen.

The Government has already put the issue of property tax on the long finger. Back in 2015, then minister for finance Michael Noonan took the decision to postpone a revaluation of the local property tax (LPT) from 2016 until 2019. This followed a recommendation in a report from former public servant Dr Don Thornhill that a revised system of assessing liabilities be introduced, and it meant that homeowners have continued to pay tax based on a 2012 valuation of their properties.

Now however, his successor Paschal Donohoe must come up with a solution. But the clock is ticking. And fast.

If the Government goes ahead with the revaluation however, it’s clear that homeowners in certain parts of the State will get a shock when their bill arrives while those in others, such as Limerick, where values haven’t risen at the same pace, may have less to fear.

If the Government was to simply allow a revaluation of the tax, based on the current regime, it could face sizeable resistance. After all, it is something that affects most of the population, given that the tax is based on returns for some 1.68 million properties.

Back when the tax was first introduced, the property price register was still in its infancy and property sales were thin on the ground. This meant homeowners had a little bit more flexibility when it came to erring on the side of undervaluing their property. Fast forward five years however and there is now a wealth of history of property prices. Moreover, these prices have increased significantly, meaning that homeowners could be facing hefty property tax increases.

If the property tax was based on national price growth, there could be an argument for another revaluation in 2019. However, the tax is based on the value of your individual property, and as prices have not risen at the same rate across the country, it means that some homeowners may be burdened with a far greater rise in the tax than others.

Consider the table above. It shows that homeowners in Limerick city, where prices have risen only by about 9 per cent since 2013, according to CSO figures, may actually see a small increase or none at all in their local property tax bills from 2019.

While the local council has applied an increase of 9 per cent to the standard rate of tax, homeowners may face no increase arising from a revaluation. As our example shows, someone with a property worth €50,000 in 2013 will still be in the €0-€100,000 band in 2019.

Elsewhere, however, property prices have risen rapidly. In Co Cavan for example, prices have more than doubled since 2013 lows. And while still modest, at an average sales price of €108,000 in May 2017, it means that someone paying annual tax of €90 today may face a bill of €225 post-2019.

In addition, the use of bands may lead to further inequality. It means that an increase will be applied disproportionately to those with properties valued at the upper end of a band.

So, while the band system will protect some homeowners from the full brunt of price increases, it will hit others harder.

And remember, prices are expected to rise further over this year and next, which means that the ultimate tax bill could be even higher by 2019.

Of course some properties have already had their valuations changed – about 11,000 based on end-2016 figures. This “self-correction” arises where Revenue has queried the original valuation of a property, and often comes to light when someone is selling a property. Before the property conveyancing is complete, Revenue may look to “regularise” the local property tax.

About a half of these corrections moved up one price band, with less than a third moving up two bands. Just 6 per cent moved up five bands or more.

Any movement in the tax will be of keen interest to owners of homes in the €1 million plus bracket. While many undoubtedly have deep enough pockets to cover any mooted increase, others, who are living in substantial properties with moderate incomes, may struggle.

Properties in this category are subject to a higher rate of property tax. The tax is levied at 0.18 per cent on the value up to €1 million, with any additional value taxed at 0.25 per cent.

Figures from the Revenue show that just 3,360 properties are currently placed in this category based on 2013 valuations. However, given rocketing property prices, the number who will have to pay tax at a higher rate will likely be far greater.

Indeed, back in 2013, the first year the property tax was introduced, just 317 properties across the State sold for €1 million or more. But the property price register shows that, already this year, some 370 properties have been sold in this price bracket nationwide, 299 of them in Dublin. This is up from 327 properties nationwide in the same period in 2016.

Many of the pricier properties are in areas in Dublin where local councils have applied the maximum reduction allowable – ie 15 per cent. For example, someone paying tax on a €3 million property in Ballsbridge will have a tax bill of €5,780, but it would be €6,800 if the full rate was applied.

If the council was to apply tax at the full rate – or even increase it by 15 per cent, which it is allowed to do – and the property was to be valued at the market rate, it would lead to a hefty increase for those living in €1 million plus properties.

But if the Government decides to move away from a valuation base, what are its other options?

Writing in this newspaper recently Josepha Madigan, Fine Gael TD for Dublin South, said that calculating the tax based on site value, or the size of a property should be explored.

“Both have the benefit of relative price stability and would spread the LPT [local property tax] burden more evenly across the country,” she said, adding that giving local authorities greater power to amend local rates could also assist in addressing this problem.

However, in Dr Thornhill’s 2015 report, he said: “I have reconsidered these considerations and remain of the view that market value is the most appropriate and equitable basis on which to determine LPT liabilities.”

More recently however, he warned that increasing the tax by as much as 60 per cent is a “shock” that needs to be avoided.

How much will you owe next year?

While talk about what happens in 2019 may be ongoing, property owners will still need to get their affairs in order to settle their upcoming 2018 tax bill.

This year, the “chargeable” date is November 1st, which means that if you own a property in Ireland as of this date, you will be liable to pay property tax on it for the following year.

If you sell your residential property after this date, you will still be liable to pay LPT on the property for 2018, even if it is sold before the end of 2017.

But it is not yet clear exactly how much you will owe. This is because councils have the ability to charge the tax at the standard rate (0.18 per cent) or apply an increase/decrease to this rate of up to 15 per cent.

Last year for example, 23 councils applied the basic rate of LPT, while five had a reduced rate, including the four Dublin councils, and three (Limerick city and county, and Wexford and Galway) actually increased it by varying degrees.

At present, councils across the State are considering whether or not they should cut the tax – something which would please homeowners in the area, but could also lead to a drop in funding for services.

Both Offaly and Dublin City Council, for example, have put the issue out to public consultation, and councils are expected to make their decisions by September 30th.