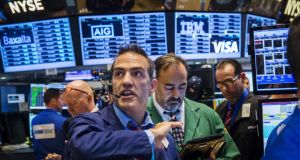 Traders on the floor of the New York Stock Exchange: if markets are going up, it’s better to put your money to work right away to take full advantage of the market growth. Photograph: Reuters/Lucas Jackson

You’ve got a lump sum of money to invest but you’re nervous that international stock markets, trading near all-time highs after six years of strong gains, may be vulnerable to sharp falls.

Should you invest your money slowly, over many months, to guard yourself against the risk – however slight – of another market meltdown? Or should you forgo all attempts at timing, invest your money for the long run and forget about it?

Euro-cost averaging (ECA) – systematically investing regular amounts of money – has long been a popular approach, with adherents saying it can juice returns as well as reducing risk.

After all, the theory goes, by drip-feeding the same amount of money into stocks on a monthly basis, you will buy more shares when prices are low and less when prices are high. As one popular personal finance book put it, it is “as close to infallible investing as you can get. It genuinely slants the odds in the investor’s favour.”

Finance professors, however, rarely share this enthusiasm. One paper, Mathematical Illusion; Why Dollar-Cost Averaging Does Not Work, concluded the practice had “psychological appeal” and little else. Another said ECA’s “additional cost and effort” meant it “cannot be justified for any investor, regardless of degree of risk aversion”.

Academic disdain is decades old, for one simple reason – most of the time, markets rise. If you delay putting your money to work, returns suffer.

In the ECA example, the money is transferred in equal amounts over a specified period (usually 12 months) and then held for the remainder of the 10-year period.

The results were remarkably similar across all three countries, with the lump sum approach delivering better returns two-thirds of the time. On average, the lump sum investor was $55,000 richer at the end of the decade. Risk-adjusted returns were also better.

“This is really quite intuitive – if markets are going up, it’s better to put your money to work right away to take full advantage of the market growth”, said Vanguard. “The prudent action is investing the lump sum immediately to gain exposure to the markets as soon as possible.”

So should investors shun ECA? Do the results prove the drip-feeding approach is unjustifiable?

As the Vanguard report accepts, cautious investors “may be less concerned by averages than they are about worst-case scenarios, as well as the potential feelings of regret that would occur if a lump-sum investment were made immediately prior to a market decline.”

The risk-averse investor, terrified by the notion of investing his money at a market peak, may end up suffering investment paralysis, and just doing nothing at all.

In contrast, averaging into markets will allow some investors to sleep better at night. If markets fall, they will be happy they are losing less money than they would otherwise have done. If markets rise, they will cheer their gains.

ECA, Vanguard found, did perform better during market downturns, and may therefore be a “logical alternative” for those looking for short-term downside protection. In a quarter of the 10-year periods studied, the ECA investor saved $43,000 or more than the lump sum investor. More pertinently, the savings were sometimes substantial – in the worst 5 per cent of 10-year results, they exceeded $200,000.

Some investors will willingly choose lower returns if it means a reduction in market risk. Besides, the argument can be made that while ECA usually delivered inferior 10-year results, they were not alarmingly lower – on average, the lump sum portfolio ended up being 2.3 per cent higher in the US, 2.2 per cent in the UK, and just 1.3 per cent in Australia.

For example, if one wanted one’s account to rise by €1,000 a month, one should have an account worth €2,000 after two months. If market falls resulted in a €1,700 portfolio, you invest €1,300 in the third month, to bring its value up to your earlier target. If markets quickly recover, and your portfolio is worth €4,300 after four months, you would then lodge just €700 into your account.

If markets continued to rise, you may even end up selling some shares. Does it work? Edleson says it outperforms ECA on 95 per cent of occasions, making it “about as close to ‘buy low, sell high’ as we’re going to get without a crystal ball.”

One study largely agreed, describing the results as “amazing” and saying it beat other approaches without incurring additional risk.

Secondly, many people will not have the discipline to follow the strategy, which can take time, effort and guts. Investors often forget to rebalance their portfolios annually; what are the odds they will get out their calculator every month or two, do the maths and dispassionately make the necessary adjustments? If the markets are crashing and the investment outlook suddenly turns apocalyptic, will ordinary investors have the guts to continue transferring increased amounts of money into the fund?

Just as one might say ECA’s practicality and ease makes up for its frequent underperformance, value averaging’s theoretical appeal is partly undermined by its lack of practicality. This could explain why the strategy has never really taken off with the public, or been actively promoted by financial advisers. Ordinary investors looking to transfer part of their salary into an investment account every month may find it too burdensome compared to ECA.

Weighing it all up

Clearly, euro-cost averaging is not all it’s cracked up to be, and it’s nowhere near “infallible”. Nor is it as useless as some academics suggest, however. The reality is that ordinary investors tend to be a nervy bunch. They fret about market volatility and are prone to feelings of regret, feelings that can catalyse dodgy decision-making. If the drip-feeding approach eases these concerns, who’s to say it’s wrong?

1 Bogus notion that supply will cure our housing woes
2 Suspicions rife as key Brexit trade talks begin in Brussels
3 Life as a Facebook moderator: ‘People are awful. This is what my job has taught me’
4 Flight attendant seeks High Court injunction against Aer Lingus
5 Irish companies restrict travel over coronavirus fears
6 Coronavirus rocks financial world as hopes for containment fade
7 ‘The only time apartments were viable was in . . . Ballsbridge, Killiney and Dalkey’
8 Bank leaked my loan request to family who tried to rip me off
9 Why Irish banks are now looking beyond vulture funds on problem loans
10 ‘The Brexit loan scheme was a great initiative and it has helped us continue to grow’
Real news has value SUBSCRIBE
Save money on international transfers