Brexit effect: What does sterling weakness mean for Irish consumers?

The euro has risen above 90 pence for the first time this year. Is that bad? 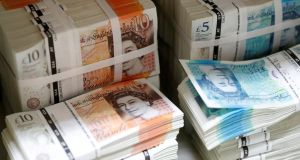 Sterling has plunged against both the dollar and the euro as fears of a hard Brexit swirl round volatile currency markets.

On Wednesday, the euro rose above the psychologically important level of 90 pence for the first time this year and remained there on Thursday. As European markets closed, it was hovering around 89.90p.

We have been here before: last August also saw a major sterling wobble. Indeed, the currency has never really recovered from the precipitous drops it suffered in the months after the UK’s vote to leave the European Union in 2016.

But what does a weak sterling and a relatively strong euro mean for consumers, retailers, holidaymakers and exporters?

A weaker pound means people in the Republic can get more sterling for their euro. Historically, this has sent people to the North to do grocery and other shopping.

In 2009, the last time (before Brexit) that the euro flirted with sterling parity, TNS Worldpanel found that retail giants Sainsbury’s and Asda had a combined 2.5 per cent share of the Republic’s grocery market. This was despite the fact that neither chain had any shops south of the Border.

Smaller retailers in Border towns often prepare for currency fluctuations in their pricing policies so they can smooth out the impact on their business, with many offering parity even when it doesn’t apply.

In the Republic, one of the most noticeable impacts of the sterling trend since mid-2016 has been felt in the car market, which has become swamped by UK imports.

British chains with outlets in the euro zone often don’t adjust their euro prices when sterling sinks, with the result that a shopper in Dublin may pay more for the same item than a shopper in Belfast or London.

For example, a biker jacket from Philip Green’s Topshop costs £85 on its UK website, but €117 on its Republic of Ireland one, even though £85 on current exchange rates is below €95.

In Marks & Spencer, a pair of Autograph suede shoes costs £65 (about €72) from its UK site, which won’t deliver to the Republic, but is priced at €90 on its euro site and in its Dublin Grafton Street store. A survey by The Irish Times last October found M&S was charging 39 per cent more in the Republic for a basket of items in its Christmas food catalogue.

The scale of the differences is likely to compel more Irish consumers to shop in the sterling zone or try to find ways of ordering from UK sites and paying sterling prices.

In the months after the Brexit vote, the pound fell more than 15 per cent against the euro, with the result that holidays in the euro zone were immediately more expensive for UK tourists.

That was bad news for the Republic’s tourism market, with visitors to the State from Britain falling 7 per cent in 2017.

Although arrivals from Britain have recovered a little bit this year, Tourism Ireland says it’s too early to say if it represents a turnaround in the trend, with the impact of Brexit remaining “a concern”.

The problem isn’t just that holidays here are more expensive for British visitors, it’s that Britain has become more affordable for visitors from the euro zone who might otherwise have been tempted to come here.

Irish holidaymakers, of course, will find better value in Britain when sterling is weak.

While a weak pound is good news for importers, for Irish exporters it could have serious consequences. Before Brexit, the euro was just below 77 pence. For some companies, difficulties will have ensued once it crossed the 85 pence mark.

This latest sterling slide comes at an uncertain time for trade generally, with Donald Trump’s protectionist White House policies and trade war rhetoric compounding fears about what will happen to trade between the Republic and the UK once it leaves the EU.

With a political stalemate within the Conservative party still unresolved in Westminster ahead of critical negotiations in Brussels this autumn, pressure on the pound may get worse before it eases off.

Bank of England governor Mark Carney’s remarks that that the risk of a “no deal” Brexit are “uncomfortably high” and “highly undesirable” have contributed to this latest dip.

Some currency market traders are pricing in a further depreciation of the pound as the crucial Brexit deadline counts down, triggering talk of euro-sterling parity. That will be bad news for Irish exporters and businesses that depend on custom from sterling-using visitors.

Inside Randox, the Northern Irish firm at the heart of UK’s Covid testing effort 05:03
Opinion: Make it easier to comply with green regulations, than not 05:02
Irish-founded home-buying service Spring eyes local market 05:00
Flutter to buy out US business in €3.4bn deal 20:36
Norwegian Air proposes restructuring and share sale in bid to survive 20:12