Cantillon: Bank of Ireland and PTSB up ante with mortgage rate cuts 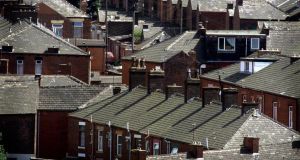 ‘There has been a predictable outcry about the failure of banks to pass on their largesse to existing customers on their current mortgage products.’ Photograph: Howard Walker

Banks have wasted no time in the new year upping the ante in their battle of wills with the Central Bank.

The regulator is coming under increasing pressure from Government and industry to soften its proposed limits on mortgage lending. The bank is considering extensive feedback from a public consultation on those plans which would force most new homebuyers to save a deposit of 20 per cent of the purchase price and limit the amount they could borrow to 3½ times incomes.

The banks have been briefing furiously against the plan in the run-up to the Central Bank decision, expected this month.

Now, opening a new front, both Bank of Ireland and Permanent TSB have announced significant cuts to a range of mortgage rates. Permanent TSB is cutting around 0.4 of a percentage point off variable rates for new business, while Bank of Ireland is cutting 0.9 of a percentage point from a range of fixed rates for both new customers and existing borrowers who want to switch to a fixed rate. It is also shaving a fraction off its variable mortgage rate but only for people borrowing less than 80 per cent of the value of their homes.

In the absence of a cut in ECB rates and following a year when house prices recovered dramatically, it is difficult to understand the banks’ move except as an effort to persuade potential homeowners wary of new Central Bank rules to get in now before any new regime is put in place.

There has been a predictable outcry about the failure of banks to pass on their largesse to existing customers on their current mortgage products, with one consumer advocate calling for a boycott of the two lenders. The fury might be understandable but the only real surprise is that they should be surprised. As the banks have shown since the bailout, they have little intention of making any change to the way they manage their business except where forced to do so.