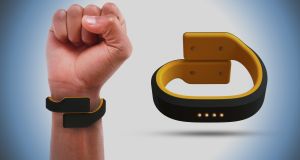 Pavlok is a wearable device which will vibrate, beep or send “zaptic” feedback to help change one’s naughty behaviour

Ivan Pavlov’s dogs are as entrenched in popular culture as Schrödinger’s cat. The only difference is that most people don’t know the first thing about quantum mechanics whereas the science behind Pavlov’s conditioned response experiments is widely understood.

Training one’s brain to associate a bad habit with some sort of negative stimulus – an electric shock, an unpleasant image, odour, or even a harsh sound – has helped many people quit smoking, overeating, biting nails and so on. The problem with this approach, however, is how to deliver the necessary stimulus each time the bad habit is being performed.

Pavlok is a new wearable device, about the size of an Apple watch, which will vibrate, beep or send “zaptic” feedback to help change one’s naughty behaviour. The zap can be activated manually via a button on the device or it can be connected to other software and hardware to automate the stimuli.

Pavlok CEO Maneesh Sethi, who is also editor-in-chief of the blog Hack the System, was inspired to create the technology after he conducted a rather unconventional – but ultimately successful – experiment to help improve his own concentration. In 2013, he noticed just how much time he was wasting on Facebook and other social media when he could have been writing. So he decided to hire someone on Craigslist to sit with him in his office full-time and slap him in the face every time he got off task. “It was very effective: the experiment boosted his productivity by over 400 per cent,” explains Sims McGrath, director of marketing at Pavlok.

Pavlok won’t slap you in the face but it will deliver a shock of up to 450 volts. “That sounds like a lot but it’s not painful,” says McGrath. “Most people describe it as uncomfortable, like getting pinched.”

Another approach suggested is for users to perform their bad habit for five minutes a day for five days and administer the stimulus repeatedly. “This can also be effective for limiting pretty much any habit,” says McGrath.

Of course, a manual approach won’t necessarily work in every case. Some bad habits, like nail-biting, are done unconsciously. “Nail-biters often don’t even realise they have their hand in their mouths,” says McGrath. “We are currently perfecting an algorithm that will be able to detect nail-biting or smoking by using a built-in three-axis accelerometer which will know when you lift your hand to your mouth and hold it there,” he says. “We can also use IFTTT (‘If This Then That’) web services to trigger feedback through the device, meaning you can customise how and why Pavlok automatically zaps you. Later this year we’ll also have our open Application Programme Interface [API)], meaning developers will be able to build robust integrations with any connected sensor – motion, voice, proximity, GPS, etc.”

So far the company has shipped more than 6,000 Pavloks, mainly in the US but also to Germany, Norway, England and Australia. Feedback has been largely positive so far. “The most popular habits to quit appear to be eating sugar, smoking, nail-biting and hair-pulling,” says McGrath.

The company did a number of studies of their own to test how well the device worked. “We did an experiment with the University of Massachusetts in Boston, where we gave a group of smokers a Pavlok to use for 10 days. Seventy-five per cent either dramatically reduced their daily cigarette intake or quit smoking entirely.”

’Tis the season for fad diets, unused gym memberships and empty promises. Could a once-coveted Pavlok end up in the closet alongside the Pilates step and Atkins diet book? The habit cessation market is worth about $100 billion worldwide but is largely underserved because the vast majority of so-called “habit breakers” are ineffective.

“We are making a proven scientific method, with 80-plus years of research to back it up, available to the mass market,” says McGrath. “Plus, aversion therapy has never shown any dangerous or lasting side effects. There’s no point relying on one’s own resolve. Willpower is a made-up metric, an amorphous concept, and is different for each person.”