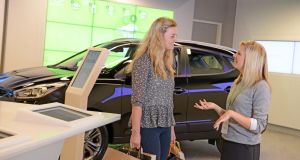 Buying a car from Rockar can be as fast as buying a book from Amazon. There is no trip to a dealership to haggle over price and Rockar will value your trade-in in 30 seconds and provide you with finance if required. There is no test drive if you don’t want one – it seems that nearly 50 per cent of customers decline a test on a new car – and your vehicle will be delivered to your door with the final paperwork completed in your home.

If a customer wants more interaction and to physically see and touch the car they’re buying, they can visit a Rockar store and take it for a spin. But the store bears little resemblance to a traditional car dealership. For a start it’s likely to be in the middle of a busy shopping centre, tucked in between The Body Shop and Marks & Sparks. There are no salespeople, only Rockar Angels, whose job is to tell you as much or as little as you want to know about the product. If you want a test drive they give you the car for an hour on your own. The company does not train employees to sell and does not offer commission or bonuses to any staff member.

“Rockar is a game-changer that completely challenges the traditional car buying process in every way possible,” Simon Dixon says. “We put the emphasis more on encouraging customers to interact with the brand and less on the actual process of buying a car. We focus on the experience. Normally a deal is 90 per cent transaction and 10 per cent brand interaction. We thought that could be swapped.”

Having left the car retailing business over 10 years ago, Dixon had experienced car buying as an ‘ordinary’ customer and realised just how bad it can be. “The main focus was the deal. Everything else was secondary and I got really fed up with people who didn’t know their product and couldn’t care less about customer service,” he says.

“Looking around me I could see how successfully other sectors had moved to the web – even banking, which one might have expected to be more conservative – but the car business was stuck in the Dark Ages.”

In 2012 Dixon pulled a small team of people together to look at how they could develop a new way of buying a car that was completely organised from the customer’s perspective. “I deliberately avoided recruiting people from motor industry backgrounds. We have just two people with industry experience in the company and I am one of them,” Dixon says.

“The critical issues were putting the customer in charge of every step of the process and accessibility – as in a convenient place for customers to view cars at their leisure and take a relaxed test drive if they wanted to. This in turn led us to the conclusion that major shopping centres were the best location. Their footfalls run into millions every a year, so it’s an effective way of creating awareness of the brand, as we don’t do any external marketing.” Rockar owners can drop their cars off for a service at the shopping centre, go shopping, take in a movie or have a meal and pick it up as they leave.

Rockar partnered with Hyundai to open its first store in the Bluewater mall on the outskirts of London in November last year. Within three weeks it had become the most visited Hyundai dealer in the UK. And the impressive figures don’t stop there. Since then over 128,000 people have visited the outlet – more than the rest of the UK Hyundai network combined for the period – and 95 per cent of its sales have been conquest, for example from other brands. The Rockar site has had over 200,000 visits and 58 per cent of visitors are women. Perhaps reflecting the fact that women often feel “talked down to” at dealerships, this has translated into a sales split of 60 per cent in favour of female buyers. Rockar will sell around 1,000 new Hyundai cars in 2015.

There’s also a female bias among the Rockar Angels, although Dixon stresses that was not the intention. “Angels are chosen purely on their personalities and it just happened that of the 18 angels recruited, 13 are female,” he says.

The Rockar store is fitted out with giant interactive digital display screens and there are workstations with 21-inch tablets that customers can use to make their purchase. Roughly half of buyers complete in store and half on line, and around 50 per cent buy without a test drive. Rockar has its service centre a short hop from the Bluewater mall. The company only sells new cars and trade-ins are sent to an auction rooms within 24 hours of a deal being closed.

Dixon originally studied architecture, before joining his father in the family car retailing business in Yorkshire. Together they built Dixon Motors into the UK’s third-largest retail motor group. It was largely run along traditional lines, but the Dixons showed an appetite for innovation, becoming involved with Royal Bank of Scotland to set up early internet car sales company, Jamjar. Dixon Motors was subsequently acquired by Royal Bank of Scotland in 2002.

Dixon then became involved in the property and leisure business, before turning his attention to developing Rockar three years ago.

“We spent around six months researching the market and deciding how to mould the results into a new business,” he says.

“We built some technology to enable our vision and when the build was almost complete we approached four manufacturers and Hyundai came through. The relationship started with Hyundai UK, who are a very ‘make it happen’ team, and they made the case to the Koreans. We’re not into having a huge list of brands. We want to represent a few and have a very strong relationship with them.”

Dixon describes Rockar as an operator rather than a dealership, although it has a typical franchise agreement with Hyundai and makes its money the normal way. Investment to date has been around £5 million (€7.04 million) and more Rockar stores are on the way. Dixon says the business model is portable and scalable and will work outside the UK. “We can look in very different directions for new business, to Africa for example,” he says.

Rockar employs 34 people and is based in the small Yorkshire village of Newbald. Its technology is proprietary and it controls all of the intellectual property.

While some motor manufacturers, such as Mercedes in Germany, have made forays into internet sales, they have stopped short of selling online, as they don’t want to cut across their dealers. Hyundai clearly takes a different view and one thing’s for sure: Rockar has instigated a seismic shift in how people buy cars.

1 Opioid executive admits to ‘no morals’ ahead of prison term
2 South Dublin Credit Union members urged to borrow more to ensure survival
3 Are there annual limits on inheritances or gifts to a child?
4 American YouTubers embrace the crisp sandwich
5 From chips to €14bn in trade: Ireland and Italy’s enduring exchange
6 Who are Ireland’s 17 billionaires?
7 Election proposals may make the housing crisis worse
8 NI businesses fear burden of post-Brexit red tape on goods transport
9 Farmer seeks to challenge €3.6bn Intel plan in High Court
10 Help, I’ve no PRSI stamps – can I still get a pension?
Real news has value SUBSCRIBE