Issue also to be raised with Central Bank 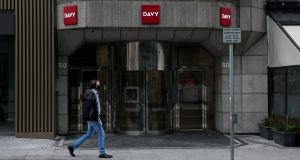 The Oireachtas finance committee is to ask Davy Stockbrokers for an explanation of the events that led to it being hit with a record €4.1 million fine by the Central Bank.

At a behind-closed-doors meeting on Wednesday, the committee agreed to write to the stockbroker with a series of questions about a bond deal where a group of 16 staff sought to make a profit without telling a client or the firm’s compliance team that they were on the other side of the trade.

John McGuinness, Fianna Fáil TD for Carlow-Kilkenny and chair of the committee, said it would raise the issue with the Central Bank when it comes before them next week, and intends to write to Davy and invite the stockbroker to appear before it.

The Central Bank investigation found Davy breached rules, did not take reasonable steps to identify whether a conflict of interest arose, and concluded that the firm’s controls weren’t up to scratch.

In addition to that, after a suggestion from Sinn Féin finance spokesman Pearse Doherty, the committee will write to Minister for Finance Paschal Donohoe on the matter, and the National Treasury Management Agency, which uses Davy services for sovereign bond placements.

“There needs to be an explanation given as to what happened. [Taxpayers] have a vested interest in the banking and financial services sector; we must be told the truth on this. The public want to know,” he said, adding that the full story should be told “so the appropriate action can be taken by the appropriate agency of the state - there is something that stinks about this that needs to be examined”.

Mr Doherty said those involved should be held accountable for their actions, and unless this happened, he believed that the NTMA “will have no choice but to cut all ties with Davy. The State cannot allow any entity or individual that puts personal financial gain above its regulatory requirements to have any involvement, as a primary dealer or otherwise, in something as important as its assets and liabilities.”

Solidarity TD Mick Barry, who is a member of the committee, said the intention is to “keep this issue on the agenda in the coming weeks. I particularly look forward to engaging with the Minister on the issue”

“In my view, the State should stop doing business with Davy and the Government should introduce legislation aimed at preventing what occurred from happening again in the future.”

8 Euronext Dublin pulled down by Ryanair after profit warning