No favours post-Brexit, Vestager reiterates EU stance and the importance of overseas aid 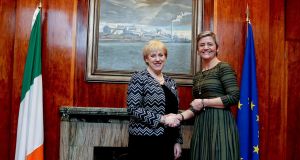 Financial firms fleeing Brexit cannot expect the Central Bank to do them any favours to fast-track approvalto operate in Ireland, Minister of State for Finance Services Michael D’Arcy said. Simon Carswell has the details.

Ireland will not be sacrificed by the EU in its efforts to broker a Brexit deal with the UK, competition commissioner Margrethe Vestager has said, reports Eoin Burke-Kennedy. Amid concerns the proposed backstop arrangement to avoid a hard Border on the island of Ireland may be watered down to facilitate the UK, Ms Vestager said the EU stood firmly behind Ireland on the issue.

Aer Lingus may have to hire up to 380 pilots over the next four years as the airline expands its north Atlantic business, according to some calculations. The Irish carrier, now part of International Consolidated Airlines’ Group (IAG) will in coming months receive the first of nine Airbus A32 long-range craft that it is acquiring over the next few years to expand its fleet of 50 planes, writes Barry O’Halloran.

Northern Ireland companies have started issuing protective notices to staff as they escalate their no-deal Brexit contingency plans against the backdrop of growing anxiety over the prospect of a hard Border, industry leaders have said. Francess McDonnell reports.

Joe Brennan, in Davos, finds China more than willing to puts its case for superpower status.

John FitzGerald tells us how important overseas aid is to us.

Una McCaffrey meets celebrity chef Dylan McGrath and hears how he has parked his failures to find a niche in the middle market, including the newly-opened Shelbourne Social.

Laura Slattery navigates the wackier bits of Planet Business for you.

“If you are not healthy, there will be no business,” says Orla Veale, founder of Conker, a company focused on the health and wellness sectors.

In this week’s Brexit Proof, we hear from Irene and Philip McAleese, founders of See.Sense, on how they are preparing for Britain’s departure.

1 Wet pub openings fuelled rise in Irish Covid infection rates – report
2 Chris Johns: Economies may enjoy ‘roaring twenties’ if ministers learn lessons
3 Basic income for all: Has the Covid crisis given us a new economic model?
4 There was no vaccine for Anglo: Why the last crisis was different
5 How long can Government afford to keep State pension age at 66?
6 Online shoppers face unwelcome tax surprise
7 ‘I don’t need to do any of this. . .I don’t actually need to work.’
8 Direct sea routes to Europe offer certainty in choppy Brexit waters
9 Only way is up for Stripe as valuation skyrockets
10 Karlin Lillington: How I managed to cut my mobile phone bill by at least half
Real news has value SUBSCRIBE