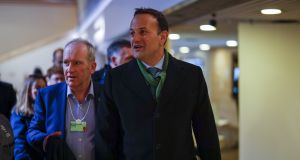 Taoiseach Leo Varadkar and Minister for Finance Paschal Donohoe moved on Thursday to defend Ireland’s low-tax regime and €13 billion Apple case at the World Economic Forum (WEF) in Davos, as politicians and international tax officials took swipes at the Republic.

Angel Gurria, secretary general of the Organisation for the Economic Co-operation and Development (OECD), said on a tax panel with Mr Donohoe at the Swiss mountain resort that while his body has always maintained countries should be able to set their own tax rates, Apple’s high-profile “sweetheart deal” in Ireland is an example of where the system was “being gamed”.

Meanwhile, Polish prime minister Mateusz Morawiecki used a session on the future of the EU, where he sat next to the Taoiseach, to take issue with “tax havens in Europe which abuse their power, or abuse their taxation systems to the detriment of other countries”, which, he said, should stop.

“This is not helping the European Union to build trust,” Mr Morawiecki said, noting that he is a strong supporter of an EU-wide digital tax for technology giants operating, to which Ireland is opposed.

Mr Donohoe highlighted that Ireland and Apple are currently appealing a 2016 European Commission decision that the US technology giant received illegal tax aid from the State.

“The key case that we will be putting forward is that much of the charges that have been levied at us are due to the fact that there was a mismatch between our tax code and the international tax environment,” the minister said, adding that much of this was addressed by US law changes in late 2017 paving they way for the country’s multinationals to repatriate earnings at a discounted tax rate.

The EU’s case is that the Revenue Commissioners gave Apple an unfair advantage in two “rulings” in 1991 and 2007, by allowing the company channel most of its European sales through “head office” divisions of two group subsidiaries in Ireland, which were non-resident for tax purposes.

Apple and the Government argue that because the iPhone marker’s products and services are created, designed and engineered in the US, the bulk of the profits of the units were due on the other side of the Atlantic.

Meanwhile, Mr Varadkar and Mr Donohoe said Ireland has not been given enough credit for its moves in recent years to close off various tax loopholes. These include the so-called “double Irish”, and a strategy whereby companies could be resident in Ireland but stateless for tax purposes.

Both said that the State will continue to close off any other loopholes that might be used by companies for aggressive tax planning.

Still, the Republic, having long resisted efforts by the European Commission to set up a common consolidated corporate tax base (CCCTB) and financial transactions tax regime, was among a group of countries, including Sweden and Denmark, that effectively blocked a Brussels proposal last year to introduce a digital tax, levied at a rate of 3 per cent on EU-based digital sales of multinational companies.

The Government has repeatedly insisted that any digital tax should be levied on profits, not sales, and be led by at OECD level, not by the EU. The 34-member OECD is working on laying the groundwork this year on an international tax on technology giants, with Mr Gurria signalling that “implantation” of this will start in 2020.

“We need to tax the digital [world],” he said, adding that it is important that the system is “put together very prudently” and has “broad-based agreement”.