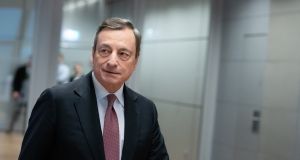 The European Central Bank has sounded the alarm over the euro-zone economy, warning a slowdown it thought would be temporary was showing signs of becoming long-lasting because of global trade tensions, Brexit and financial market volatility.

The shift in outlook, which policymakers said had clearly “moved to the downside”, comes just six weeks after the ECB removed the most important element of its crisis-era stimulus, halting new purchases of bonds as part of its €2.6 trillion quantitative easing programme.

“We were unanimous about acknowledging the weaker momentum and changing the balance of risk for growth,” said Mario Draghi, ECB president.

The new guidance, which the ECB said had not yet trigger a change in monetary policy, came amid mounting signs of economic trouble across the euro zone.

A monthly poll of purchasing managers, a key gauge of business activity, fell to its lowest levels since the euro-zone debt crisis in January.

In Germany, a separate gauge for manufacturers fell just below the threshold of 50 that separates expansion from contraction and fell far short of a score of 51.3 expected by economists in a Reuters poll, highlighting the damage wrought by trade tensions on Europe’s largest exporter.

The shift in global economic sentiment triggered by the US-China trade war and investor nervousness over the rising cost of borrowing has presented a quandary for all the world’s largest central banks, which have spent much of the last two years slowly unwinding cheap money policies implemented during the financial crisis.

The US Federal Reserve signalled it was slowing the pace of rate increases last month for similar reasons to those cited by the ECB, and the Bank of England has not tightened monetary policy since August amid mounting fears of a disorderly Brexit.

Although there was no change in policy at Thursday’s ECB meeting, Mr Draghi signalled the bank would react should the data continue to disappoint.

He was reluctant to spell out exactly how its monetary policy would change, and the ECB has little room to manoeuvre with its benchmark interest rate left unchanged at zero. The deposit rate charged on a portion of bank’s deposits parked at the ECB stayed at minus 0.4 per cent.

The ECB gave no indication of whether it was preparing to cut interest rates, saying its governing council “expects the key ECB interest rates to remain at their present levels at least through the summer of 2019”.

While Mr Draghi signalled markets were right to bet the bank would not raise rates until 2020, there is likely to be pressure on the ECB to revise its message in the months ahead if economic data continues to be poor.

Although the ECB has ended the purchase of new bonds, it said it would continue the practice of rolling over the existing bonds it holds until after it started raising interest rates. Mr Draghi said this policy – which is set to keep the ECB’s balance sheet bloated for years to come –was keeping longer-term borrowing costs low.

The euro fell sharply after the gloomy outlook was announced, hitting a fresh month low at $1.1305, down 0.7 per cent at the end of European trading.

Mr Draghi said several policymakers had raised the question of whether the ECB should offer banks a new round of cheap loans – known as targeted longer-term refinancing operations – which would help to maintain the availability of cheap credit to the economy. But he said there had been no full discussion of the policy options.

Euro zone growth fell to its lowest level in four years in the third quarter, with the region’s economy expanding by just 0.2 per cent. The bank had hoped in mid-December that the weakness would prove temporary.

However, almost all of the data published since then has been disappointing. Thursday’s PMI data provided more signs that growth would not rebound in the fourth quarter, suggesting the economy faced more pervasive problems than initially thought.