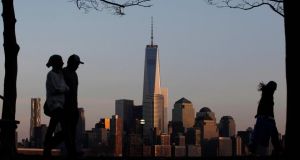 A few years ago, officials and executives in New York proclaimed their ambition: to build the city into a powerful hotbed for tech innovation and since then money has poured into the city’s tech sector. But no New York start-up has been a breakout hit, the sort of blockbuster with a multibillion-dollar valuation that has become so commonplace in Silicon Valley. Photograph: EPA/Gary Hershorn

A few years ago, officials and executives in New York proclaimed their ambition: to build the city into a powerful hotbed for tech innovation.

Social media darlings such as Foursquare, in downtown Manhattan, and the crafts retailer Etsy, in the Dumbo neighbourhood of Brooklyn, were hailed as surefire breakouts.

Since then, money has poured into the city’s tech sector – not as much as in Silicon Valley, but at a faster clip. Dozens of homegrown tech companies have attracted millions of users. Start-ups connected with New York’s major industries such as media, advertising and commerce are finding particular success.

But no New York start-up has been a breakout hit, the sort of blockbuster with a multibillion-dollar valuation that has become so commonplace in Silicon Valley.

And that has led to some disappointment for people who helped set the city’s sights so high.

“The hype has definitely died down,” said David Tisch, an investor and a co-founder of Techstars, a start-up incubator in New York, where he was formerly a managing director. “It’s harder to point to one thing and say, ‘that’s New York tech’.”

Some companies have come close to breaking out but hit one bump or another.

Tumblr, the blogging service based in downtown Manhattan, made headlines in May when Yahoo acquired it for $1.1 billion (€0.8bn).

But the sale, widely considered a major moment for the city’s tech scene, was also seen by many as a Hail Mary because the company was struggling to turn itself into a successful business when the deal went through.

Fab. com, an online retailer, once looked as if it could be the next Amazon.

But in the last year, it has lost top executives and has struggled to keep its financial footing.

Even Foursquare, the location-sharing app that gained widespread attention a few years ago and was often the subject of acquisition rumours, has faded a bit from the spotlight.

The company recently said that 45 million people had downloaded its application, but Foursquare would not release active user numbers.

Some prominent New York investors who had been bullish on the city and local start-ups have started to look beyond its borders.

Fred Wilson, for example, a partner at the Manhattan firm Union Square Ventures, said he had been putting more money into other markets, including Europe and Canada.

In an email, Wilson defined it as a “gradual and nuanced change”. He added, “I expect NYC-based companies will always be the largest cohort in our portfolio.”

And investors are still betting on the city.

Anand Sanwal, chief executive of CB Insights, said New York showed promise in early-stage companies and that there were also opportunities to make the crucial midstage investments companies need to grow and scale.

He pointed out that New York now attracted more venture capital than Boston, which used to hold the runner-up title behind Silicon Valley.

Entrepreneurs and investors agree that practically any tech company can be started in New York.

The real challenge comes when trying to build a business with more than a five-person team working in cramped quarters and eating ramen, said Zach Sims, who started the coding instruction site Codecademy in Silicon Valley but moved it to New York, where he has hired 50 people in the last two years.

“The talent needed to grow a company to 500 people is a lot harder to find” in New York, he said.

That’s because many of the city’s most promising engineers go to work at outposts of major companies like Facebook, which offer big salaries and generous benefits.

Still, Sims said he remained bullish on the city and is eager for the next few generations of engineers and talent to enter the startup community.

He pointed to the efforts of Michael R Bloomberg, the former mayor, to strengthen the pipeline for engineers and developers with initiatives like the Cornell technology campus on Roosevelt Island, which is expected to open in 2017. Some classes are already available to students.

New York start-ups are sprinkled across the city’s boroughs – from the Flatiron in Manhattan, to Greenpoint in Brooklyn and Long Island City in Queens – and their employees mingle at the same gatherings, parties and events.

But it is still a far cry from the intellectual brain trust and density of tech-minded types in Silicon Valley.

“The most harmful thing that limits a company in New York is that they are not part of the milieu of Silicon Valley,” said Roelof Botha, a partner at Sequoia Capital in Silicon Valley.

Being in the San Francisco area, he said, helps startup founders know the right people to pick up on bits of gossip about new product releases or venture financing rounds.

Botha said he had not seen anything to discourage him from thinking that New York would eventually end up an important hub of the tech industry.

But he also said 95 per cent of his company’s investments were in West Coast companies.

Amanda Peyton, a founder and the chief executive of New York-based Grand St, a technology marketplace that last week was sold to Etsy, said that unlike in the Silicon Valley, existing New York industries were incorporating technology startups into their operations.

“Technology is such a big part of the businesses here,” she said, “which is almost more important because of the way it influences the industries that are here.”

That is not enough, though, for Tisch, the investor.

He said the city could use another injection of energy and excitement to keep its tech engine humming.

“This city definitely needs a new company that we can all cheer for,” Tisch said. “That’s for sure.”