Humans have managed to change the atmosphere on a global scale, and as a result the planet is warming up 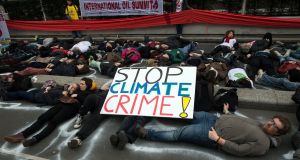 Protesters against climate change pretending to be dead outside a Paris hotel last week where the International Petrol Summit was taking place. Photograph: EPA/ETIENNE LAURENT

It is hard to imagine there is anyone left who still questions climate change or that the altered weather patterns and global warming we are experiencing are not a consequence of human activity.

Surprisingly the doubters are out there and in considerable numbers unfortunately. They are happy to believe that humans have nothing to do with the changes we see in the seasons and in the shrinking Arctic Sea ice cover or the melting of the Antarctic peninsula.

So how do the climate-change deniers persist in the face of an overwhelming volume of scientific research that shows we are causing climate change?

A study by Trinity College Dublin and University of Exeter of 16,000 publications about climate change by 19 major think tanks over the 15-year period to 2013 showed a marked increase in attacks on research findings.

“Our data suggest that the era of climate-chance denial is not over,” says Trinity’s Prof Constantine Boussalis, who with colleagues published their findings last February in Global Environmental Change.

A recent study from the University of Queensland’s Global Change Institute and other international colleagues writing in Environmental Research Letters describes assessing tens of thousands of research papers on climate change. This is one of a number of studies that comes to the same conclusion. There is no room left for confusion about this issue; collectively humans have managed to change the atmosphere on a global scale, and as a result the planet is warming up.

The researchers found that 97 per cent of climate scientists agree with this view. There is no uncertainty. There is no doubt. One wonders how the doubters come to their conclusions in the face of such certainty. The Queensland study was conducted to provide yet another proof – as if any more were needed – that scientists have reached a very high level of consensus on this issue.

And it isn’t just the scientists. The UN climate conference in Paris last December got 195 nations to agree to act in the face of global warming, to take action on controlling carbon release into the atmosphere, and to sign a treaty as a binding agreement to respond to the threat.

Why was the study needed given it just repeated what other studies had found?

Because the deniers who would seek to cause confusion over human-induced climate change are doing a better job at getting their message out to the people than the science lobby. They have stirred up enough doubt to make the public believe that disagreement persists amongst scientists.

The deniers claim there are valid, natural reasons for warming other than human activity so there is no need to change anything we are doing.

Theirs is a more comforting message – you don’t have to change anything, you can continue to drive your 5-litre SUV the half kilometre to the supermarket.

The result is widespread scepticism in the US and Australia, the authors say. Only 12 per cent of people in the US are aware of the high level of scientific consensus, and the figure in Australia is 15 per cent.

The door has already closed on this one but only a fraction of people heard the catch click on doubts over climate change.

The shadowy groups determined to keep doubts in place continue their nefarious work so who cares? Irish business innovators should.

It may be a bit of that silver lining in a deeply grey cloud, but companies here will have to adjust to an altered climate reality. This will open up new opportunities for those involved in a wide range of businesses, for example engineering companies, construction, consultants, and agriculture.

People will be looking for help and services that can provide answers for problems that arise, for example dealing with flooding risks, finding ways to guarantee water supplies, being able to cope with a wetter, hotter, stormier or drier climate – or all of these – depending on how it emerges in Ireland.

Now is the time to be developing ways to respond. Climate change will throw up problems but also advantages. It will come down to research and the work of scientists, technologists, engineers and not to mention meteorologists.

And stop laughing if someone jokes about the notion of Irish wineries. They already exist. We are officially listed as a wine-producing country by the European Commission. We have three vineries in Co Cork, two in Mallow and one in Kinsale. There is a winery in Cappoquin, Co Waterford, and in Lusk, Co Dublin.

With our evolving climate innovation will be needed in many disciplines, with its delivery only a matter of research away.