New Innovators: ‘Data management is behind the times’ 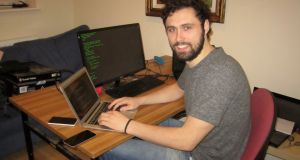 Eoin Murray has put his PhD in Cambridge on hold as he works on developing Rinocloud further.

As a young science student at UCC, Eoin Murray had his first introduction to working with data in a laboratory setting. His career path then took him to Cambridge University where he began studying for a PhD in physics in 2014. What had surprised Murray as an undergraduate was that data management was manual. He assumed this would not be the case when he climbed the academic ladder. He was wrong.

Fed up with time wasting methods for recording data, Murray took things into his own hands. He has now developed Rinocloud, a data hub for scientific researchers delivered as software as a service.

“It fully integrates with lab equipment, points all data generated to one place fully metadated and is instantly searchable,” he says. “It is designed specifically with the needs of the researcher in mind and organises data the way scientists need it with notes, comments and tags. It also facilitates discussion and ideas generation and ultimately makes researchers and their equipment more efficient and frees them to spend more time extracting information and publishing.”

“I used to have to cut and paste data into generic file storage without metadata so searching for something specific was time consuming,” he says. “Sharing and collaboration was done via email and memory sticks and taking physical notes. Over the summer before I went to Cambridge I started writing scripts and code and generally brainstorming with friends on how data management could be made more efficient. I dropped the project when I went to Cambridge assuming data management would not be outdated there. I also discovered the same problem exists in commercial labs.”

Murray began looking for commercial software to solve the problem but found nothing suitable. He also talked to peers in some of the most advanced universities in the world and discovered they too were using a manual system.

Murray has put his PhD on hold to devote himself fully to the development of Rinocloud. The product is currently in beta testing and will be officially launched later this month.

The product will be offered free to individual researchers and Murray is targeting high-profile researchers in the top universities worldwide initially. Research groups will pay a modest fee (yet to be determined) while enterprises users will pay a commercial rate.

“Rinocloud was developed by six PhDs and post docs locked in a room for four months living on pizza and coffee and when we came out we had a market viable product,” Murray says. “Initially the product went to some of my friends in Oxford, Cambridge and MIT for testing, but word got out and we’ve had hundreds of researchers looking for it.”

Rinocloud has three full-time employees and the cost of getting it up and running has been time rather than money. However hard cash is now needed to fund the commercial launch and to add more features. Murray says the company is close to raising its first seed round. Its biggest problem now is keeping up with demand as the orders are rolling in.