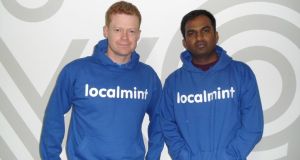 Two years ago, Ranga Vadhineni needed to locate an out-of-hours pharmacy in a hurry when his son became very ill. He assumed the internet would be the quickest way. Far from it. The search proved frustrating in the extreme but it also sparked an idea in Vadhineni’s mind for a new business. The result is Localmint, a multi-platform website that helps consumers find local retailers easily and quickly, no matter what device they are using.

“Consumers can find details such as opening hours and location information or they can search by store category from their current location – all from one app or website,” says Vadhineni, a software consultant who has worked with Dell and Microsoft.

Vadhineni’s partner in the business is Oisin Ryan. His background is in the financial services sector. He recently left his role as a senior consultant with Aon to join Localmint full-time. “Ranga and I met in the lift on the way up to the first ever ‘Find a Co-Founder Meetup’ held in Dublin’s T-Cube in August 2013,” he says.

“We got chatting after the pitches and when Ranga described his project, I immediately saw the potential. After an extended period of ‘founder dating’ we formalised the relationship and Localmint was set up last December.”

At that stage Vadhineni had already put two years of his spare time into developing his idea and had a functioning site generating a small amount of advertising revenue. Up to then the main investment in the venture was time and about €10,000 from personal resources. “The key saving was having the technical skills within the team. Getting Localmint off the ground without them would have been an entirely different financial proposition,” Vadhineni says.

Earlier this year, Localmint was accepted onto the LaunchPad accelerator programme run by the National Digital Research Centre (NDRC). “The funding from the NDRC has been invaluable in enabling us to focus full-time on the business and expand our team,” Vadhineni adds. “We were also accepted onto Microsoft’s Bizpark programme which provides start-ups with software and cloud storage services among other benefits. This has allowed us to run the business on a much smaller budget.”

Localmint operates in Ireland, the UK and Australia, and in April 2014 more than 850,000 people used the site between the three countries. Traffic is growing at a rate of around 15 per cent a month and expansion into the US is planned for June this year. Localmint has developed its own system to pull down information and keep it updated but it also encourages retailers to post their details on its site (for free) and keep them current.

“Geo tagging is a key part of our platform and every retail outlet in our system is given its own longitude and latitude coordinates and is mapped for our users’ benefit,” Vadhineni says. “For the 70 per cent of our users accessing our mobile website or iOS app, this means they can search for stores nearby by category or store name. Very handy when you are in a hurry or on the move.”

Other services, such as Google Places and Yelp, are already operating in the search market, but Ryan says they often don’t have key data consumers are looking for. “Our research has shown that people find store locator tools difficult to find, even on a desktop website. This problem is magnified when browsing via a mobile device,” he says. “Some retailers have addressed this problem by building their own apps, but does anyone really want to download 20 or 30 apps or have to go looking for a new one each time they want to visit a new store? We have built a centralised solution.”

Localmint expects to be employing 10 people by the end of this year and is currently looking to raise about €750,000 in development funding.