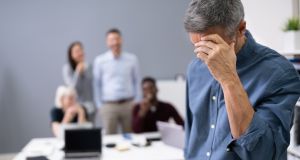 New code defines bullying as “repeated inappropriate behaviour... which could be reasonably regarded as undermining the individual’s right to dignity at work”. File photograph: iStock

A new code of practice on workplace bullying has urged employers to take “robust preventative approaches” and ensure “clear, transparent procedures are in place” to avoid the “spiralling negative consequences” of bullying.

The Workplace Relations Committee (WRC) and Health And Safety Authority’s (HSA) new joint code of practice warns that workplace bullying can result in a “dysfunctional work environment, low morale, lost time and litigation issues” as well as “physical and or/mental ill health” among those personally involved.

Workplace bullying can undermine a person’s self-esteem and standing in a “harmful, sustained way” and involves “repeated incidents or a pattern of behaviour that is usually intended to intimidate, offend, degrade or humiliate a particular person or group of people”, notes the code.

At a company or employer level, workplace bullying can result in “reputational damage, absences of employees, reduced productivity, increased costs, poor morale and loss of respect for managers and supervisors”, it adds.

The new Code of Practice for Employers and Employees on the Prevention and Resolution of Bullying at Work, which came into effect on December 23rd 2020, was approved on Wednesday by Minister of State for Business, Employment and Retail Damien English.

The revised code’s guidelines apply to all employees, whether they work at a fixed location, at home or are mobile.

It underlines employers’ responsibility to “clearly state that bullying in the workplace is not acceptable” and to deal with any complaints of this nature sensitively. It also emphasises the importance of ensuring records of interventions and decisions are in line with GDPR regulations and notes the obligation for employers to progress complaints informally where possible and formally when appropriate.

The code warns that the often interchangeable use of the terms “harassment” and “bullying” can lead to misunderstandings, underlining that both behaviours are “legally distinct concepts”. The new dual code relates specifically to bullying in the workplace and does not extend to harassment, it clarifies.

Under the Employment Equality Acts, harassment is “any unwanted conduct related to any discriminatory grounds”, while sexual harassment is defined as “any form of unwanted verbal, non-verbal or physical conduct of a sexual nature”. A code of practice with guidance on these areas has been published by the Irish Human Rights and Equality Commission.

According to the new joint code, bullying is defined as “repeated inappropriate behaviour, direct or indirect, whether verbal, physical or otherwise... which could be reasonably regarded as undermining the individual’s right to dignity at work”.

It also warns that an innocent person who is subject of a complaint, or unaware of the effects of their behaviour, can suffer from anxiety, panic, distress and potential social embarrassment/career damage.

“The effects of even one complaint of alleged bullying are pervasive across an organisation,” it warns. “The spiralling negative consequence of bullying claims cannot be over-stated so it is in the best interests of all concerned to have robust preventive approaches and effective clear, transparent procedures in place, which are used effectively.”

While a “once-off” incident of bullying may be “an affront to dignity” and “unsettling”, this does not fall under the code’s definition of bullying, it states. Disrespectful behaviour, conflicts and disagreements and troubling relationship breakdowns also may not be of “an adequate level of destructiveness” to be considered as bullying, it adds.

The code also says it does not aim to address physical assault at work and that violence is a criminal matter and should be reported to gardaí.

The code was updated following consultation between the HSA and WRC with representative organisations including the Irish Congress of Trade Unions, the Irish Business and Employers’ Confederation and Government departments, along with a public consultation on the topic.